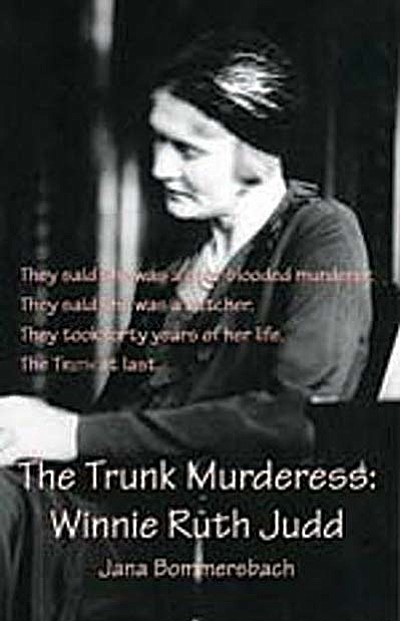 Crime legend or a miscarriage of justice? That is the question we hope is answered when Jana Bommersbach, one of Arizona's most respected and acclaimed journalists, visits Nellie Bly Gallery at 136 Main St. in Jerome on April 18 from 1-5 p.m.

Bommersbach has earned numerous national, state, and regional awards, including the prestigious Don Bolles Award for investigative reporting for the newspaper series on Winnie Ruth Judd that led to The Trunk Murderess: Winnie Ruth Judd, the 2010 OneBook AZ selection for adults.

The Trunk Murderess: Winnie Ruth Judd, tells the story of a 26-year-old beauty named Winnie Ruth Judd who was accused of murdering her two best girlfriends one hot Phoenix night in 1931. If history is right, she hacked up their bodies, stuffed the pieces into a trunk, and took them by train to Los Angeles as her baggage.

If history is right, she was sentenced to die but "cheated the gallows" by acting insane. She spent nearly 40 years in Arizona's insane asylum -- flummoxing officials by escaping six times.

If history is right, she only got her freedom at age 66 -- after serving more time than any other convicted murderer in the history of the nation -- because Arizona was finally tired of punishing her. But if history is wrong, Winnie Ruth Judd's life was squandered in a horrible miscarriage of justice.

In this American crime legend, there is also the story of Phoenix, Arizona -- a backwater town that would become a major American city -- and the story of a unique moment in American history filled with social taboos. But most of all, it is the story of a woman with the courage to survive.

OneBookAZ has been presented since 2002 by the Arizona State Library, Archives and Public Records, the Institute for Museum and Library Services, the Arizona Commission on the Arts, the Arizona Library Association, and Maricopa Community Colleges, in partnership with libraries, museums, and educational institutions across Arizona; with support from APS, The Arizona Republic, Follett Library Resources, KAET, Phoenix College, Sun Sounds of Arizona, and the Phoenix Book Company.