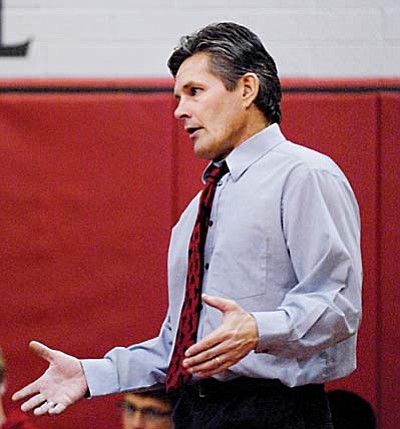 COTTONWOOD - Laura Logsdon, president of the Mingus Union Education Association, read a statement to the school board Wednesday night in support of Tom Wokasch.

One of Arizona's most successful high school wrestling coaches, Wokasch is under investigation by the Arizona Auditor General for allegedly depositing money from ticket sales of wrestling events into his personal banking accounts. He recently resigned as head wrestling coach, but he is still a teacher in good standing pending the outcome of the investigation.

Although not an official union, the MUEA has functioned for years as a negotiating body for teachers and other employees on issues such as salaries, benefits and district budgets.

"We do know the positive legacy he has built at Mingus," Logsdon said of Wokasch's coaching record. She said Wokasch has had a positive impact on students, and that his focus has always been on building strength in students and athletes.

Although Logsdon said members do not know the details of the investigation surrounding Wokasch, the MUEA leadership felt it must make a strong statement supporting Wokasch's right to a fair process.

Attorney William Holder told The Verde Independent last week that Wokasch is a tenured teacher, and the district has a duty to hire him back next year unless he is fired. Holder said it would require a process by the district to fire Wokasch.

In fact, Wokasch's name was on a list Wednesday night of 55 teachers the board voted to offer contracts to for next year.

That might not mean he will automatically be back as a teacher for the next school year.

Superintendent Tim Foist also spoke to the newspaper last week about Holder's comments. He said the auditors are waiting for more information from Wokasch. "He is still a teacher in good standing," Foist said. "And the process will start when charges are presented to the Board of Education by our attorneys."

Foist pointed out that the district does not face a deadline in a case such as this one as to when it gives Wokasch notice that he would not be asked back.

Mingus still awaits Wokasch report from AZ. Auditor General
Wokasch attorney files Notice of Claim against Foist
Mingus board votes to dismiss Wokasch
Foist: Wokasch will not return as teacher at Mingus next year
School Board changes direction on Wokasch