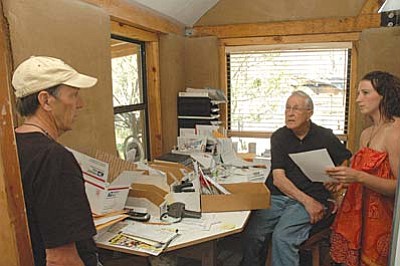 The nerve center of Seeds Trust is a cramped but cozy adobe building on the backside of his home in Cornville. From the racks and sacks of seeds in inventory, Seeds Trust ships to thousands of customers world wide.

CORNVILLE - Like most of us, all Bill McDorman ever wanted out of life was a decent tomato.

As requests go, it would rate among the simplest. But when his search began some 30 years ago, decent tomatoes were as common as hen's teeth.

True, there were racks of seeds at the nursery, emblazoned with colorful pictures of red ripe wonders. The package promised bug-free, disease-resistant tomatoes that would mature before you could return a second time with the watering can.

In short, what McDorman found was the best seeds modern science had to offer.

But that was not what he was looking for. He was looking for real tomatoes, like the ones his grandparents grew -- the kind that didn't necessarily produce a bright red, symmetrical, eight-pound beauty, occasionally needed some TLC to keep the bugs away and offered up fruit in its own sweet time.

In short, he was looking for tomatoes with moxie, that looked, smelled and tasted like the land from which they were grown.

Whereas most of us would have reached for the rack, McDorman reached for a something few of us had ever heard of in the 1970s.

Today they are called heirloom seeds. They produce the fruits and vegetables that have kept the world fed far longer than the scientific wonders that grocery stores now passed off as food.

His reach has taken him around the world, from Central America to Siberia.

And today, from his tightly packed adobe warehouse on the back roads of Cornville, Bill McDorman makes a living sharing and selling the fruits of his 30-year search for a decent tomato.

He calls his business Seeds Trust.

McDorman's journey began in Missoula, Mont., when he was in college. His search actually had two goals -- finding his grandparent's long-lost tomatoes and finding plants in general that could survive the short and unforgiving Montana growing season.

"I just wanted to buy some seeds for my own garden. But I soon discovered there was a bigger problem than just going down to the store and buying seeds," he says.

The problem, he discovered, was purely economic. Seed companies produce hybrids because they make money.

The first generation of a hybrid produces the desired traits of whatever plants it was hybridized from. The second generation is worthless -- making seed collection a mute point and forcing the customer to come back again and again to the seed company.

Additionally, because hybrids are artificially created, they can be patented.

"It wasn't long before I got interested in the idea that it would be worth spending some time trying to find old heirloom, open pollinated varieties that just weren't around anymore.

"It seemed to me there had to be varieties around that were better adapted to the harsh Montana climate than what was being offered in the seed catalogs of the day," says McDorman.

He ended up finding a bunch of different seeds and soon started a nonprofit called the Down Home Project and a seed company called Garden City Seeds.

The nonprofit is still alive and well, operating out of McDormon's old house in Missoula. Garden City Seeds was sold off and now has its own Web site.

After graduating from college and returning to his native Ketchum, Idaho, McDorman started another seed company, High Altitude Seeds.

"The idea was the same. In these little fringe climates, the one-size-fits-all hybrids don't work as well as some of the stuff that has already adapted," he says.

Within 10 years, High Altitude Gardens became Seeds Trust. And it was during the transition to Seeds Trust that McDorman's quest went international.

"I was looking for those things that hadn't been lost in the drive to hybridize the whole vegetable kingdom," he says. "I went to Guatemala and Latin America only to find out the seed companies had already been there.

"Then it occurred to a friend of mine that perhaps the treasure chest we were looking for was behind the Iron Curtain. In 1989, I got an invitation to go to Siberia and visit horticultural institutes and botanical gardens."

What he found was a cornucopia of untouched seed.

"Everybody was still saving their seed," says McDorman. "It was this incredible place. I brought back 60 varieties of superior tasting Siberian tomatoes. It was just one of the things I brought back. It was one of the most rewarding things I have done in my life."

When a story about one of his Siberian tomatoes ran in Organic Gardening magazine, McDorman's involvement with heirloom seeds expanded exponentially.

"People from all over the world started sending me seeds. So I didn't really have to go looking any more," he says.

Then Martha Stewart discovered Siberian tomatoes in a New York market. Her trail to find out how they got there led her to McDorman. The company found itself in the limelight once again after an article on McDorman was published in Martha Stewart Living.

"After 30 years of doing this I am finally beginning to understand how it's done," he says. "It has been an interesting experience to say the least."

Taking his high altitude seed fetish to the desert about five years ago has led to new discoveries as well as unanswered questions.

"What I am finding is that these heirloom treasures have an ability to adapt that the hybrids don't. Perhaps it's their ability to withstand extremes that allows a cold weather tomato from Siberia to do so well in the desert heat.

"I would estimate that 80 percent of the things I brought down from the mountains of Idaho are working wonderfully here. I know this because before we sell anything we have to grow it out, test it and taste it."

It should be made clear that Seeds Trust is not a repository of just tomato seeds. In fact they offer more than 400 seed varieties, including corn, squash, beans, carrots, cucumbers, peppers, herbs, wildflowers and wild grasses, to name just a few.

Today, Seeds Trust has thousands of customers around the world, all dedicated to the same idea McDorman had 30 plus years ago -- growing those plants that have stood the test of time, learned to adapt to the real world and, above all, taste like the land on which they were grown.