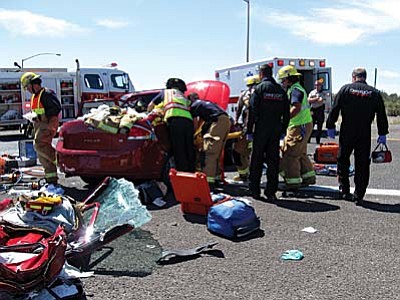 PAGE SPRINGS - A serious accident in which a Massachusetts woman was killed closed State Route 89A Thursday afternoon.

The T-bone style wreck blocked the highway just before 1 p.m. at the intersection of SR 89A and Page Springs Road.

Verde Valley Fire Chief Jerry Doerksen said that it took an extended period for crews to extract patients from one vehicle, a Ford sedan, because it was so badly crushed. The closed highway was also used as a landing zone to load patients with life-threatening injuries into two helicopters bound for Flagstaff Medical Center.

Verde Valley Ambulance took another patient from the second vehicle, a Honda, to Verde Valley Medical Center. That patient was eventually flown to John C. Lincoln in Phoenix.

According to DPS, the Ford was southbound with four occupants including the dead woman and was turning onto Page Springs Road. The Ford was struck in the passenger side by a northbound Honda.

The deceased, identified as Mary Ann Anderson, 68, was pronounced dead at the Flagstaff hospital