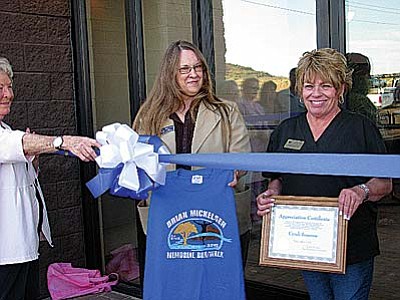 Approximately nine years ago, Verde Valley Humane Society CEO Cyndi Sessoms had a dream of a new adoption center to save as many lives of abandoned, abused, and lost animals in the Verde Valley.

On Friday, April 16, Cyndi Sessoms cut the ribbon to open Phase I of that building and "Adopt For Life" Center for Animals officially opened.

The journey has been long and hard filled with naysayers, challenges, and obstacles. The passion Ms. Sessoms has for the humane treatment of animals attracted the attention of a prominent couple and their most generous donation was supplemented by donations from the people of the community. Although approximately $14,000 is still needed to complete the purchase of furnishings and equipment, VVHS incurred no debt in the building of the center.

The opening ceremony was marked with a presentation by Mayor Diane Joens and the releasing of balloons in memory of former City Manager Brian Mickelsen and past VVHS president Ron Wilkerson. A tour of the facility and a reception was enjoyed by the public.

The walkway from the parking lot to the glass fronted building is lined with honor paving bricks. Some are in memory of a lost loved one, a cherished pet, or just to honor someone special in their lives. As you enter the building that is abundant with natural light, you immediately view the open courtyard complete with red fire hydrants and landscaping. Each dog kennel faces the courtyard and the other side of their kennel has a view of either Mingus Mountain or the mesas. The cat rooms are enclosed in glass to protect them from the outside environment. There is a petting room where you can sit and play with a kitten in an open space. There are two "get acquainted" rooms where you can sit in a home environment and evaluate the animal before you take him/her home. There is a spacious education room that can be rented out for public meetings. At the back of the courtyard stands a temporary wall that will be torn down to erect Phase II of the adoption center.

The "Adopt For Life" Center for Animals is occupied by animals that are ready for adoption. The old building will be used for the initial five-day observation period for impounded animals, and for animals that are injured or sick and need a quiet place to recover.

The new center approximately doubles the holding capacity for the lost animals of our community.