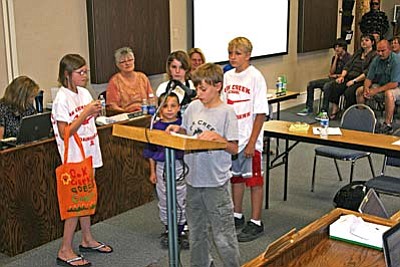 The Oak Creek School Greenies led the Pledge of Allegiance Tuesday night during the district’s School Board meeting. The Greenies also took turns telling the board members about the environmental projects the club has been working on. VVN/Philip Wright<br /><br /><!-- 1upcrlf2 -->

COTTONWOOD - The Cottonwood-Oak Creek School board voted Tuesday night to cut the district's kindergarten program from all-day to half-day. The board also voted to authorize a reduction in force of 24 employees.

The board and administration must make even more severe budget cuts in the coming weeks. None will be popular, and some will likely be contentious.

Superintendent Barbara U'Ren presented two budgets to the board. One budget is what she referred to as "the known budget." That one is bad news, but it is the best scenario of the two. The second budget covers even deeper cuts if the voters in Arizona fail to pass Proposition 100, which would increase the state's sales tax by one percent. That increase would be for three years before a built-in sunset clause would remove it.

Under the first budget - even if voters pass the sales tax increase - the district will lose another $1.1 million from its budget, in addition to what the district has already lost.

"We have to definitely prepare for the known budget," U'Ren said.

The budget impacts from the known budget include a reduction of seven teachers due to shrinking enrollment and six more teachers from the loss of kindergarten funds.

Another 2.3 teachers within the district likely will be lost.

Administrators and directors will be furloughed for three days. Two fulltime attendance secretaries will be cut to one secretary.

Other options for the Budget One include closing schools on Fridays in the summer or closing all schools for five weeks during the summer. Reducing the district's number of nurses from five to three is another option.

Budget Two, which kicks in if voters defeat Prop 100, has even more undesirable budget impacts. Those range from cutting the school week to four days to closing one campus. Moving junior high students from Oak Creek School to Cottonwood Middle School is another option.

Increasing class size is another possibility, and it would save about $300,000 by eliminating six more full-time teachers.

At the beginning of U'Ren's PowerPoint presentation, she said the "priority has always been to keep cuts away from the classroom."

She repeated that at the end of her presentation.

Then she added, "It's getting harder and harder to do."