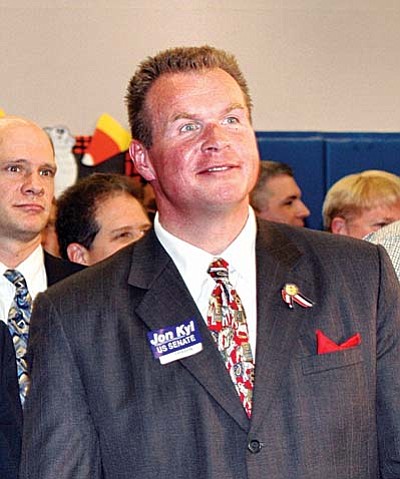 PHOENIX -- Arizona Republicans are least enamored with John McCain over what he is -- or is not -- doing about illegal immigration and securing the border, according to a new statewide poll.

The survey released Wednesday by the Behavior Research Center shows Republicans nearly evenly divided over whether the incumbent has done a good job on either issue.

But pollster Earl de Berge said if J.D. Hayworth hopes to oust McCain it's going to take more than the challenger harping that McCain is soft on illegal immigration.

"I think he's sucked out of the electorate all he's going to get on that,' de Berge said.

What's most promising for Hayworth, he explained, is the belief by Arizona voters that McCain is so busy with other issues that he hasn't paid attention to what for some is primary: creation of jobs in Arizona.

Even among Republicans questioned, only 41 percent said McCain is doing an excellent or good job of working to get more people employed.

"In Arizona, almost everyone believes the job market is bad, has been bad and is going to continue to be bad for the foreseeable future,' de Berge said. He said that creates a political opportunity for Hayworth if he can capitalize on it.

One chance of doing that, de Berge said, could be to go after what McCain considers an asset: his opposition to "earmarks' in federal legislation to get contracts and projects for local firms. In fact, McCain has criticized Hayworth for proposing earmarks during his 12 years as a member of the U.S. House of Representatives before he was defeated in 2006 by Democrat Harry Mitchell.

At this point, though, de Berge said McCain maintains a healthy lead over Hayworth.

Among Republicans who said they plan to vote in the primary, McCain is favored by 55 percent of those asked, with just 26 percent backing Hayworth. Even if de Berge adds in independents who say they intend to vote in the GOP primary, which is allowed by Arizona law, McCain's lead over Hayworth shrinks to just 54-28 percent.

None of that is good news for Democrat Rodney Glassman, the former Tucson council member who hopes to challenge whoever survives the primary.

The survey shows McCain would handily defeat Glassman by a margin of 46-24 percent, though 30 percent remain undecided.

In a head-to-head with Hayworth, though, Glassman picks up 30 percent of the vote against just 37 percent for Hayworth. And with a margin of error of 3.9 percent in the survey of 800 adult heads of household and 33 percent undecided, that puts Glassman within striking distance.