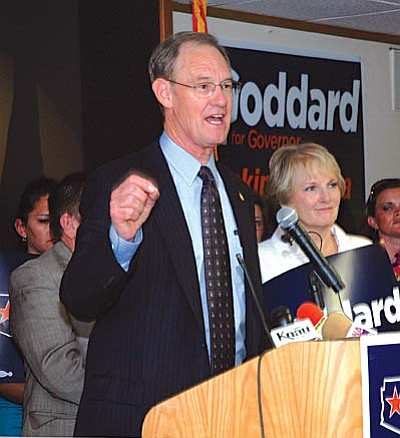 "Unless we commit to public education, to raising the bar for our public schools, Arizona will never recover economically,' he said Thursday. Goddard said that includes not just more money in basic aid but restoring the $218.3 million needed in state funding for full-day kindergarten, a victim of the last round of budget cuts.

Goddard, in his first major policy speech of his campaign, acknowledged that means "more resources to our schools.' Less clear, though, is where he intends to get the money.

"We have to take a hard look at the entire revenue system for the state in the recognition that our state public education obligation is something that we have been fundamentally failing at for way, way too long,' he said.

For example, Goddard said the state could raise $10 billion a year by imposing its sales tax on every transaction.

"It seems to me that among $10 billion, we surely can find enough to adequately fund our school system,' he said.

Pressed after his press conference at the Arizona Education Association offices for specifics, Goddard said he did not yet have a list of which products and services now exempt should be taxed. But he said a good place to start would be taxing country club memberships and "some repairs.'

Goddard also took a swat at the law which allows individuals and corporations to divert some of what they owe the state in income taxes to instead provide scholarships for students to attend private and parochial schools.

In 2009, individuals put $50.8 million into these scholarship organizations. In exchange, they got a dollar-for-dollar credit on their state income taxes.

Corporations gave $7.3 million according to the latest figures from the Arizona Department of Revenue.

Supporters of the credits say it actually costs less for the state to help these children go to private and parochial schools than it would to educate them in public schools. They also say it provides more choices for parents to best meet the needs of their youngsters.

"But at a time when we have classroom sizes approaching 40, and sometimes exceeding 40, when we have school districts such as the one where my son goes to school that have playgrounds without equipment and virtually no shade in the summer heat, we need to put our first dollars into public school systems,' he said. "This is not a time to subsidize our private school system.'

Goddard also said he opposes the measure just approved by the Legislature to require students to show they can read at the third grade level before being promoted to fourth grade.

That mandate, effective in the 2013-14 school year, would apply to this year's crop of kindergartners this fall. There will be exceptions, though, ranging from youngsters with disabilities to those who already have been held back twice before.

Instead, Goddard said, the state needs to "provide the resources for kids to learn to read as early as possible.'

"It should be encouraging (reading) rather than condemning,' he said. "It should be up to the local school district to decide exactly how that's going to be implemented.'

Goddard also was critical of the decision of lawmakers to approve -- and Gov. Jan Brewer to sign -- legislation aimed at the ethnic studies program at Tucson Unified School District.

"But it seems to me that we've gotten far too detailed in what will and will not be taught,' Goddard said.

In a later interview, though, Goddard said not everything in the legislation, set to take effect at the end of the year, is bad.

"I certainly favor the first item, that we should not have courses promoting the overthrow of the government,' he said. "That comes under my category of a general academic standard.'

But Goddard said he is "troubled' by another provision which says courses cannot "promote resentment toward a race or class of people.'

"It's not defined, it's incredibly broad,' he said.

Goddard said there also is no clear definition of a ban on courses "designed primarily for pupils of a particular ethnic group.' He said that could eliminate in public schools the kinds of programs that are regularly accepted in colleges, like black studies.

And he said it makes no sense to forbid courses cannot teach "ethnic solidarity instead of the treatment of pupils as individuals.'

"What does that have to do with core standards?' Goddard asked.

The legislation was pushed primarily by Tom Horne, the state school superintendent. He said the courses tell Hispanic students that they are the victims of oppression by Anglos and that the United States is a racist country.

Horne already has told TUSD officials he believes the program violates the law and has warned he intends to impose sanctions equal to 10 percent of the district's state aid when the law takes effect at the end of the year.

Goddard is the lone Democrat in the race. He will face off Nov. 2 against the survivor in what technically still remains a three-way Republican primary involving incumbent Jan Brewer and challengers Matt Jette and Buz Mills.