Think about it next time you're in a bookstore 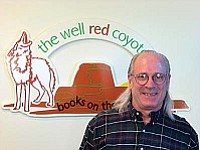 That's a quote of Jerry Seinfeld, a comedian that has made a very successful career out of verbally slapping us in the face with things that are so obvious that we sometimes fail to see them. Needless to say, it's also one of my favorite "bookstore" quotations.

I recently accompanied my wife, Kris, on a weekend book tour to Southern California. At one bookstore in Glendale, she was signing with two other authors, one of which was a relatively recent transplant from England. She now lives in Los Angeles and expressed her surprise and sadness that in a metropolitan area of about 10 million people, independent bookstores were few and far between. She also noted that Borders and Barnes & Nobles stores were also becoming scarce.

Lawrence Ferlinghetti, American poet, painter, liberal activist, and the co-founder of City Lights Booksellers in San Francisco, tells us: "Don't patronize the chain bookstores. Every time I see some author scheduled to read and sign his books at a chain bookstore, I feel like telling him he's stabbing the independent bookstores in the back."

What is ironic about the recent decline of the chain bookstores is that the same tactic they used in the '80s and '90s to put the independent bookstores out of business, i.e., deep discounting of the price of books, is now being used by Amazon, Wal-Mart and Costco to put the chain bookstores out of business. The only difference is the degree of the discounting - the latter would rather lose money on a book than lose the sale of that book to any other book retailer.

We independent booksellers have one big advantage, however, over the giants of the industry - we actually care about books and our customers, the readers of books. Books are not just a commodity, or a "loss leader" to entice you to buy groceries or shoes or big-screen TV's.

As Linda Ramsdell, owner of Galaxy Bookshop in Hardwick, Vt., recently said: "Every book that's here is here for a reason. It's been personally selected...and in this economy they are even more carefully selected and managed.... The way I think we compete is by making friends and hopefully influencing people to want to come here. We do need to make the personal connections with people so that they feel this is their store and they want to come to their store...in the same way they want to go to their aunt's house."

Often we don't miss something until it's gone, and then it's too late to do anything about it.

I invite you and encourage you to visit your local bookstore, because in this digital and disposable culture, change happens rather quickly and not all change is good.

Bookstore Karma, or What Goes Around...
Certain things are perfect the way they are
How Not to Shop in an Independent Bookstore
Welcome to our world, Mr. Patterson
Be careful what you wish for ...
Event Calendar