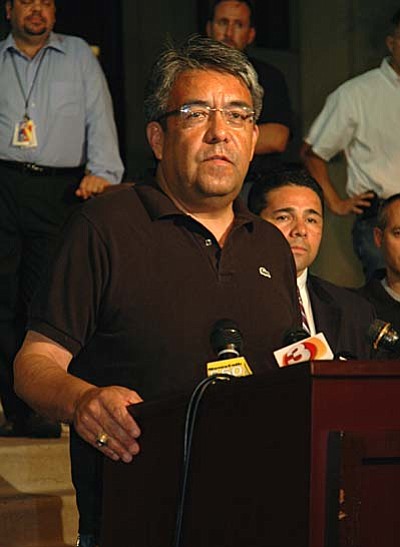 David Gonzales, the U.S. Marshal for Arizona, details Thursday night how John McCluskey, the last of three escapees from a private prison near Kingman, was captured near Springerville, along with his cousin and finance, Caslyn Welch, who had helped the inmates break out. (Capitol Media Services photo by Howard Fischer)

PHOENIX -- The last of the three inmates who escaped from a private prison near Kingman three weeks ago was captured Thursday night along with the woman who helped then break out.

John McCluskey, who was serving a 15-year sentence for second-degree murder, was captured near his tent at the Gabaldon Campground at the edge of the Apache-Sitgreaves National Forest, near Springerville. Also apprehended was Caslyn Welch, his cousin and finance.

David Gonzales, the U.S. Marshal for Arizona, said Welch drew a gun tucked in the back of her belt when the pair was approached by members of the Apache County Sheriff's Department SWAT and other law enforcement about 7 p.m. But Gonzales said the officers outdrew her and she dropped the weapon.

He also said that McCluskey, who was reclining on a sleeping bad outside the tent, admitted he had a weapon of his own inside and would have killed the officers had he been able to get it. In fact, Gonzales related, McCluskey said that, in retrospect, he should have killed the U.S. Forest Service ranger who had bumped into the pair about two hours earlier.

Gonzales credited that the ranger with identifying the pair who have been on the run since July 30. They also are believed connected with the death earlier this month of an Oklahoma couple who were slain while camping near Santa Rosa, N.M.

According to Gonzales, the ranger, who was not identified, was checking out an untended fire. He said the ranger initially found no one around.

But the ranger did find a vehicle partly hidden in the trees.

Suspicious, he checked the number on the Texas license plate and learned the vehicle had been stolen from New Mexico about the time of the murder of the Oklahoma couple.

Gonzales said the ranger did eventually come into contact with the man later identified as McCluskey. That man, Gonzales said, was "acting very nervous, very jittery.'

The circumstances of the stolen vehicle and the nervous camper, Gonzales said, caused the ranger to find the "wanted' poster from the U.S. Marshal's Office. When he matched the photos, Gonzales said, the ranger called for assistance.

Gonzales said that, given the remote area, a decision was made to have the Apache County Sheriff's Office SWAT team surround the site and wait until close to dark. He said they did not move until it was clear that both were outside the tent where they could be apprehended more easily.

The pair were booked into the county jail in St. Johns.

Still to be determined is where they will go next.

Gonzales said the campsite is still being examined for clues as to any crimes they committed while on the run, including that Santa Rosa murder. He said if there is a confirmed link, authorities in that state may want to try the pair for murder rather than having them go on trial in Mohave County for escape.

The other two escapees, Tracy Province and Daniel Renwick, had been captured earlier.

PHOENIX -- An executive with the firm that runs a private prison promised Thursday to beef up lax security that allowed three dangerous inmates to flee but said that's no guarantee it won't happen again.

"What I'm simply saying that escapes occur at both public and private,' said Odie Washington, a vice president of Management and Training Corp. "And it's incumbent upon that company, that state, to do any and everything they can to ensure that you close those gaps that inmates take advantage of.'

But a report released Thursday of a security review of the MTC-run prison near Kingman reveals that what Washington referred to as "gaps' were more like chasms.

Bulbs showing the status of the fence were burned out on control panel.

Guards were not patrolling the fence.

And it turns out that a door to a dormitory that was supposed to be locked actually had been propped open with a rock, helping the inmates escape.

Washington, however, said that's not the fault of the corporation. He said company employees at Kingman never told anyone at the corporate headquarters about the problems.

State Corrections Director Charles Ryan admitted his own audit team, which had been to the prison prior to the July 30 escape, either "didn't see or didn't report' the shortcomings.

All that is significant because the three inmates escaped when an accomplice tossed a wire cutter and they made a 30- by 22-inch hole that went undetected for hours.

Of particular concern to Ryan is the fence.

"What was found were excessive false alarms,' he said.

"In a 16-hour period on July 30th, and that number was 89 alarms,' Ryan disclosed. "The system was not maintained or calibrated.'

The result, he said, was that employees were "desensitized' to the alarms going off. And it took anywhere from 11 to 73 minutes for staffers to check out the problem and reset the alarms.

"That is absolutely unacceptable,' he said.

One of the inmates, a convicted murderer, along with the accomplice, remain at large. The other two have since been recaptured, but not before they were linked to the deaths of an Oklahoma couple who were camping in New Mexico.

"This is a terrible tragedy, and the department and the contractor have a lot of work to do,' Ryan said.

As a result of the findings, Ryan said he has put limits on what kind of criminals can be housed at the facility near Kingman.

Until now, the 1,508-bed medium-security section has included people convicted of murder. In fact, more than half of the 2,689 inmates in the entire prison system, both public and private facilities, are classified as medium security, with 796 of these sentenced to life behind bars with no possibility of release.

His order removes, at least from Kingman, anyone convicted of first degree murder, anyone who attempted escape in the last decade and anyone with more than 20 years left on a sentence. All totaled 148 inmates were taken from the facility.

But Ryan would not rule out allowing murderers back in the prison after he is satisfied that security has been upgraded. And he said there is nothing wrong with a classification system that allows convicted murders -- and even lifers -- to serve their time in medium-security prisons.

Gov. Jan Brewer sidestepped questions about the system, saying it was in place long before she became governor in January 2009.

"It is something that maybe should be reviewed,' the governor said Thursday.

"I'm not resistant to that,' Brewer continued. "But that classification is used across America.'

On the larger question of private prisons, Ryan said he remains convinced that there is a role for them. About 6,400 of the more than 40,000 people behind bars in Arizona are in private prisons within Arizona, with another 1,760 at an out-of-state facility.

The Republican-controlled Legislature remains very much in favor of private prisons, as does Brewer. She said Thursday none of that changed because of the escape, even with one of the murderers still on the loose and the dead Oklahoma couple.

"Fact of the matter is we've had private prisons throughout the United States for a great length of time and they have been successful,' Brewer said.

Attorney General Terry Goddard, the Democratic nominee for governor, refused to say he would rid the state of private prisons.

But he said there has been a "climate of permissiveness' from Brewer and the Republican-controlled Legislature toward private prisons. He said that allowed the situation at the MTC facility to get as bad as it had.

"If I were governor, they would have been fired yesterday," Goddard said of MTC.

But Brewer said the report from Ryan underscores her belief that the escape was caused by human error and nothing inherent in private prisons.

"It's very obvious those alarms should have been responded to,' the governor said.

But the problems that Ryan sketched out go beyond the actions -- or inactions -- of guards.

Washington admitted there are "significant construction issues' with the perimeter fence and the alarm system that will have to be handled. And Ryan found flaws with the entire way MTC allowed the facility to be operated.

For example, he said no one was making regular checks along the fence to look for breaches. And Ryan said guards were "not effectively controlling inmate movements' within the prison system.

Other flaws included inmates not wearing required ID badges, grooming requirements being ignored and proper searches not being done of people going into the facility.

And there was more.

Casslyn Welch, the woman accused of providing the wire cutters and a vehicle, had been banned from the prison after she was caught trying to bring in drugs. But Ryan said prison officials continued to allow her to talk to inmates over the phone, something he linked to her ability to help plan the breakout.

Welch and John McCluskey, her fiancee and cousin, remain at large and were last seen in Montana two weeks ago.

Tracy Province and Daniel Renwick have since been recaptured.

According to the report, the security problems at the facility go beyond the alarm system, the burned-out bulbs and the failure of guards to "walk' the fence, both inside and out at least twice each shift, as they were supposed to do under the contract with the state.

The design of the prison allows anyone to drive up close to the facility. Corrections officials want traffic routed away from the fence.

Other changes ordered by the state relate less directly to the July 30 escape and more linked to what state officials found when they inspected the facility. These range from chaining picnic benches together when not in use, or at least securing them in place, and replacing all metal tools and materials "that are inappropriate for a medium security facility.'
Contact
Sign up for our e-News Alerts
Most Read
7 days
30 days