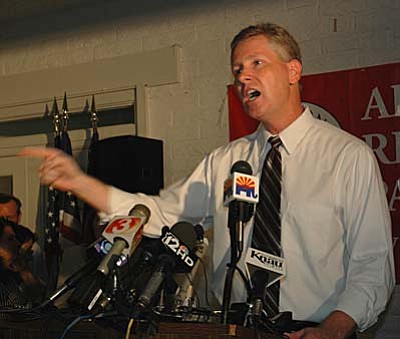 PHOENIX -- A clear winner had still not emerged Tuesday evening in the bitter and often ugly primary race Tuesday to become the Republican nominee for state attorney general.

Andrew Thomas or Tom Horne will face off in November against the Democratic nominee. Early returns showed Felecia Rotellini and David Lujan neck-in-neck in what was a much more courteous battle than the GOP contest; Vince Rabago, with his underfinanced campaign was far behind.

What remains to be seen is the tone the general election will have -- and whether the divisive Republican primary will aid the Democratic nominee.

Horne and Thomas went after each other with a vengeance not seen in a statewide campaign for decades.

Horne, running nearly $560,000 of private donations, including $300,000 of his own money, attacked Thomas' integrity during his time as Maricopa County attorney.

He pointed out that Thomas is under investigation by the State Bar of Arizona -- and possibly the FBI -- over whether he abused his position in bringing charges against county supervisors and judges. In fact, another Republican county attorney said she believed Thomas was guilty of "abuses of power' and "totalitarianism.'

Thomas, whose $224,000 campaign was financed largely with public dollars, lashed back with his own disclosures that Horne had filed for bankruptcy and signed an admission for the Securities and Exchange Commission saying he willfully violated its regulations. And while those events go back about 40 years, Horne failed to disclose that bankruptcy filings on more recent required state reports.

Despite the acrimony, both candidates agreed publicly they would support whoever won the primary. And Horne said that none of that mud-slinging will hurt the survivor.

"The voters care about what the issues are between whoever the Republican nominee is and whoever the Democratic nominee is,' Horne said. "And there will be issues,' he continued, especially illegal immigration.

The fight among Democrats, by contrast, was more subdued, concentrating on who had better credentials to lead the office.

All three had served as assistant attorneys general.

Rotellini had the added experience of being named the Director of Financial Institutions which oversees state-chartered banks, mortgage brokers and similar lenders. Lujan touted his time in the Legislature, including the last two years as House Minority Leader, saying that political experience makes him more qualified.