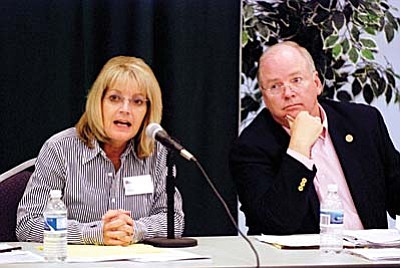 YAVAPAI COUNTY -- Incumbent Andy Tobin was the clear favorite in the race for Arizona House District One primary race.

Newcomer Karen Fann nosed out Noel Campbell for second place in the three-way race for the two Republican positions. Representative Lucy Mason is term-limited and is not in the race.

The two Republicans will run against a Democratic newcomer, Lindsay Bell, in the General Election. Bell was the lone candidate in the Democratic primary. She tallied 7,929 votes in District 1.

There were no Green or Libertarian candidates in the House race.

YAVAPAI -- There was no party competition for the District One Senate seat during the primary election. Primary voters could only vote for the Republican incumbent or the Democratic challenger. Both received more than 98 percent of the vote from their own parties.

Rancher Steve Pierce will defend his Senate position during in the re-election against Democrat Bob Donahue. He has a degree in agriculture.

Donahue, of Cornville, has been a candidate for Congress in recent campaigns. A retired businessman with a degree in economics, Donahue, was once Chairman of the Coconino Republican Party, before becoming disenchanted and switching to the Democratic party.

He operated a heavy equipment business in Flagstaff before moving to the Verde Valley. Donahue now runs a senior assisted living center in Cornville.