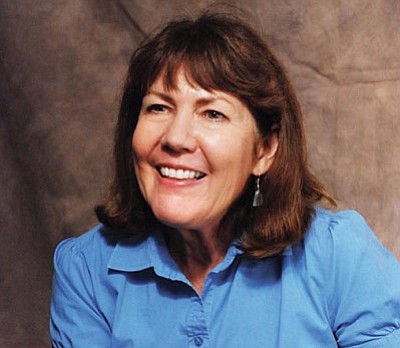 VVN/Jon Pelletier<br> U.S. House Representative for the 1st District of Arizona, Ann Kirkpatrick, sat down for a one on one interview at the offices of the Verde Independent on Thursday, Aug. 26.

COTTONWOOD -- Arizona District 1 Congresswoman Ann Kirkpatrick visited the Verde Valley, Prescott and Flagstaff this week during a break in the Congressional Schedule.

Kirkpatrick visited with the Verde Valley Food Bank, members of the Cottonwood-Verde Valley Chamber of Commerce and with Verde Valley News. She was to visit in Sedona Chamber members before visiting businesses in Flagstaff Friday.

The Democrat was not challenged in the Democratic Primary Election, but will go head to head with Flagstaff dentist Paul Gosar for the General Election.

It is his first run for office, but Gosar was the best-funded GOP candidate and carried the endorsements of former Alaska governor Sarah Palin, Maricopa Sheriff Joe Arpaio and Pinal County Sheriff Paul Babeau into the campaign. Gosar beat seven other Republicans in the primary election Tuesday. It raised the most money with significant funding from fellow dentists across the country. Gosar is Former Vice Chair, American Dental Association (ADA) Council on Governmental Affairs, Former President, Arizona Dental Association and Former President, Northern Arizona Dental Society

Gosar and Kirkpatrick have already exchanged barbs. Kirkpatrick proposed debating in late September and early October in Yavapai County, Casa Grande, the White Mountains and Flagstaff, with a fifth televised debate to be determined across the 60,000 square miles. Gosar has agreed to debates, but has not confirmed a schedule.

The full interviews with Kirkpatrick and Gosar will appear in a future issue.