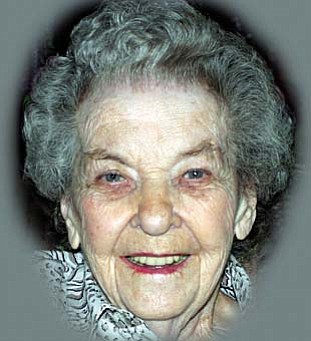 Elizabeth Roberts (Betty) Tyler, 98, of Cottonwood, AZ died on August 24 with family at her side. Betty was born November 8, 1911, in Excelsior Springs, Missouri, the daughter of Allen and Nancy Jane Roberts.

She was graduated from Excelsior Springs High School and attended cosmetology college. In 1935 she was hired by Fred Harvey to become the first beautician at the Bright Angel Lodge at the Grand Canyon. She worked at the South Rim as well as Phantom Ranch and made the trip in and out the canyon many times. She enjoyed traveling in Arizona, attending the Prescott Rodeo and, of local interest, she was present at the dedication and opening of Midgley Bridge near Sedona.

In 1941, she married Jesse L. Tyler, a Bridge and Building foreman with the Santa Fe Railroad, and lived all over Arizona and New Mexico on an “outfit” (railroad cars converted to living quarters).

She was preceded in death by her husband, Jesse, and sister, Allene Meek, and a grandson, David Tyler.

Betty was a very strong woman and a loving daughter, friend, wife, mother, and grandmother. She will be missed by everyone that knew her. We wish her peace.

Friends may visit at the Norvel Owens Funeral Home in Winslow, AZ, Friday September 3, from 5 to 6 PM. Services will be held at St. Paul’s Episcopal Church in Winslow at 10 AM Saturday, September 4, with burial following in Desert View Cemetery.