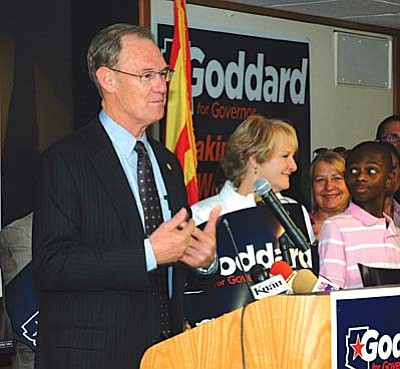 PHOENIX -- Terry Goddard may be unable to win the governor's race even if he turns the attention of voters from immigration to the economy, according to a national pollster.

Scott Rasmussen said Monday that Republican Jan Brewer has been riding high with her decision to sign what's reported to be the toughest immigration bill in the country. A new telephonic poll Rasmussen released Monday show the incumbent maintains a 19-point lead over her Democratic challenger.

And Rasmussen told Capitol Media Services that the negative reaction from some camps -- including the lawsuit by the U.S. Department of Justice -- has only made Brewer stronger.

"By the way she was attacked by people outside the state she built up a big level of support,' he said.

"It's not clear what can change that,' Rasmussen said.

"It's not going to be mere campaign tactics,' he continued. "The issues are going to have to change.'

Goddard has been trying to do just that for months, hammering away at the state's economy. That includes a 9.6 percent unemployment rate, up from just 7 percent when Brewer took office close to 20 months ago.

But the numbers are not moving in Goddard's favor.

Monday's poll shows Brewer the choice of 57 percent of those questioned, against 38 percent for Goddard.

That spread has remained more or less intact for the last two months. But Goddard was actually leading in a Rasmussen survey in March.

"That's a direct reflection of you know what,' he acknowledged of her decision in April to sign the new immigration law.

"That bill had a whole lot of popularity,' Goddard continued.

"One bill does not make a campaign for governor. There's a whole lot more to it.'

The Democratic challenger will get perhaps his best chance ever to refocus the campaign on Wednesday during what is now the only scheduled debate among the gubernatorial candidates. But Rasmussen said while the economy ia "driving issues in most elections across the country,' he's not sure Goddard can make it work for him in Arizona.

"The people who think the economy's in tough shape and getting worse are tending to support Republicans more than Democrats,' he said.

"Right now the blame is being focused at Washington, not state government,' Rasmussen explained. "And we're seeing this in state after state.'

For example, he said California Gov. Arnold Schwarzenegger, a Republican, has only a 26 percent job approval rating at the end of his career. Yet Republican Meg Whitman is leading in the race to replace him.

Goddard, however, said his campaign is more than about the economy but "where the state is headed.'

"I think that's about the economy, about budgets, the kind of cuts and the kind of management that Brewer has put in place,' he said. "We're basically avoiding hard decisions by borrowing.'

Goddard said he finds people "very upset' when he details for them how the state is spending its money.

He also remains convinced he can convince business owners and managers to support him, even with the prospect that he would have to raise some taxes to implement his plans to get the economy moving again.

For example, Goddard said Brewer signed a budget that eliminated money for job training programs. He said those funds are essential for attracting new firms.

Other questions within the poll suggest that if Goddard has any hope of getting elected he's going to need to chip away at Brewer's overall popularity.

One bright spot in the survey is that an equal number of Arizonans -- 35 percent -- perceive the views of Goddard and Brewer as extreme. But more than one out of five voters say they don't know enough about him to be sure.

The survey has a margin of error of 4.5 percent.