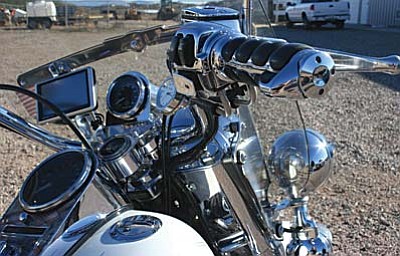 Robert Wilson knew what he was getting into when he bought his Harley-Davidson motorcycle.

For all its virile charm and glamour, the iconic American road bike had a dark side. It leaked oil everywhere it went.

"It's the nature of the beast. Like a dog, they always leave their marker. They pee on the ground," says Wilson.

But unlike most Harley owners, who accept its quirks and motor on down the road, Wilson chose to fix things.

In 1999, after giving the solution considerable thought to both form and function, Wilson submitted a patent application for a device that served as both a crankcase breather for the engine and an oil collector.

Two years later, after hiring a patent attorney and jumping through all the hoops, he received Patent Number 6,167,849 from the U.S. Patent Office.

He has since spent uncounted hours of spare time marketing the device, dickering with manufacturers and dealing with the trials, tribulations and benefits that accompany the exclusive rights to a unique idea.

"It has been used on Harleys all the way up to the new ones. I sell them to domestic aftermarket suppliers and I have also sold them internationally. I've made a little money on it, but not a whole lot," he says.

Wilson was once cheated by a Chinese manufacturer and has been forced into court to defend his patent.

A former diesel mechanic and inveterate tinkerer, he has also continued to improve his bike. In 2005 he and his wife Betty received a second patent, this time for a foldaway luggage rack.

"Harley's factory luggage rack looks like a landing pad for a helicopter. I told my wife we needed something more sleek -- more desirable. So between us we designed one that could be folded up when you weren't using it," he says.

He describes himself as "one of those people who have different ideas about different things."

As it is, Robert Wilson is just one in a long line of fertile minds that have cultivated "different ideas about different things" while making their home in the Verde Valley.

On May 23, 1899, Camp Verde farmers Jasper McCune and John Davis became the first valley residents to patent an idea.

Patent Number 625,694 was issued to the two for attachments that allowed a farmer to plow from either side of their draft animal "so as to permit a furrow being made close to an obstruction, and the dirt being thrown toward or from the same."

There is no record of what became of the invention or if either inventor cashed in on their idea.

Over the years, a slew of valley inventors have received devise patents and design patents for ideas that range from the arcane to the ... well, let's just call some of them novel approaches to less-than-urgent problems.

Many of the inventors developed their ideas while looking at problems or developing new products for the industries in which they worked.

Their patents tend to be the more esoteric, with titles such as: Method for Determining the Size of a Subsurface Ore Body or Tubular Intraluminal Graft, or Bidirectional In Vitro Transcription Vectors Utilizing a Single RNA Polymerase for both Directions.

These corporate inventors seldom receive royalties for their creations. As one of them put it, "it's just automatic. You don't have to give your consent.

"Sometimes you don't even get credit because several guys would work on the project and the name on the patent went to the first name aphetically, with et al. after that person's name."

Making money is always in the mind of anyone creating unique solutions. If not there would be no need for patent protection. But for most inventers, wealth is an elusive goal.

Perry Haddon, who is now retired and living in Camp Verde, and three other partners once invented a system for the transmission and reception of directional radio signals.

They got an offer they couldn't refuse. Haddon's share was "nearly a million dollars." His payment came in corporate stock, of which he was restricted from selling for one year.

"We watched the stock go from $4 a share to $28 a share. We all started looking at ranches to buy. But when the year was up, the only thing we could afford was a new pick up," Haddon says.

Undeterred, Haddon has continued to look for novel solutions to some of life's more and/or less perplexing problems.

In 2002 he submitted a patent application for a "Vertical Hammock and Pillow," a contraption that would "allow a person to sleep in a sitting position in an airplane, bus, wheelchair or any place the lack of space...may require a vertical sitting position for long periods of time."

It remains a work in progress and clearly falls into the category of "novel approaches to less than urgent problems," for which a host of patents have been issued to valley inventors.

Judging from the universal nature of the subject contemplated by three inventors from Sedona, it is apparent that the privacy of a bathroom offers an ideal place to sit and ponder these sorts of problems.

Sedona resident Eugene Zimmerman and his partner Lance Rose of Flagstaff have a patent for an "Air Fresh Toilet."

When the lid is raised and weight is applied to the seat, valves activate a water driven turbine that "pumps undesirable odor bearing gases from the toilet bowl and discharges them to the sewer."

James Bethanis has a patent for a toilet seat with integral handles so "a person using the seat can stabilize his or her body while exerting downward pressure on the seat."

And Debra Oliver patented Retractable Squat-Facilitation Toilet Footrests, "which inclines the femurs of the toilet user into a healthful squatting position."

But not all free thinkers need a quiet and contemplative setting to generate new ideas. Life's little obstacles are enough to get their creative juices flowing.

Cottonwood inventor Michael Harwood holds Patent Number 6,473,907 for a Dual-Visor Cap. One visor is fixed like a typical baseball cap. The second can be "selectively moved...to either side to shade the wearer's face."

Linda Stapley and Allen Guinn, both of Cottonwood, hold the patent rights to a Self-Cleaning Rake, a unique solution to a problem that, according to patent office records, has been attempted on at least four previous occasions.

And Clair Rasmussen and Eldon Wheeler of Cottonwood hold Patent Number 5,513,980 for devising a way to override the child-proof mechanisms on disposable lighters.

Other patents held by local inventors include a golf ball carrier, a fishing weight that rolls along the lake bottom, tanning glasses, a cat/children's toy and a sleeping bag with a removable sheet.

None of them report huge returns on their creations.

But one local inventor with an idea he patented earlier this year hopes to change that trend. Anthony Spillman of Cottonwood holds Design Patent Number D597,276. It is for a "Brassiere with Built-in Cell Phone Pockets."

"I've had ideas all my life, and all my life I have watched women stick things in their bras. So I thought, why not. I started playing with the idea and got hooked up with a company that helps inventors. So far I haven't had any bites, but you have to start somewhere," he says.

Should Spillman's idea and spirit of entrepreneurship prove successful, it would only prove that although necessity remains the mother of invention, creating a need is where the big money can be found.