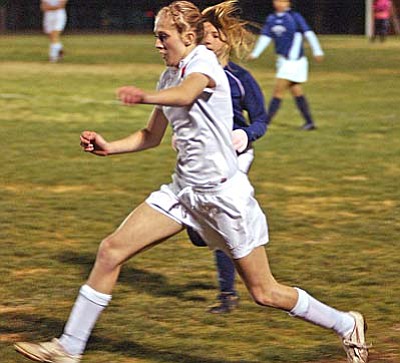 <b>Amanda Randolph</b> sprints down the sideline toward the ball Tuesday in Camp Verde against Independence. VVN/Sean Morris

The game was played in Camp Verde because the Mingus field is undergoing repairs, but the game could have been played anywhere-it didn't matter, Mingus dominated.

Most of the game was played on the Independence side of the field. Braly had a hat-trick at halftime.

"I don't really keep track of how many goals I score in a game, but I think four might top it," said Braly.

Mingus' defense was solid and the midfield controlled the ball well. The Patriots never had a chance. Mingus took over 18 shots on goal and the Patriots had far less.

It was a good first win for the defending state-champion marauders. They are a team full of skillful players and most of them can play multiple positions.

It gives Head Coach Buddy Rhodes a lot of freedom to switch the lineup around and employ strategy.

One of the things Rhodes did in the game Tuesday was start Kayla Dixon at forward. She normally plays center midfield, but her speed enticed Rhodes to move her up top.

Eventually Dixon was back in her normal position where she feels most comfortable, but it's nice for Rhodes to have the freedom to shift players around in competition to experiment and still win easily.

Another lineup change Rhodes tried out was moving Courtney Hageman from keeper to the field. Taylor Brott is the backup keeper and her teammates have a lot of confidence in her. Rhodes said Brott could start on most other teams, but Hageman will remain the starter in goal for now.

With all the great athletes with good soccer sense on the Mingus team they have a tremendous opportunity to repeat as champions this year. Yes, they lost good players, but it appears they filled up the voids with other good players.

Jesse Zaske is the only returning starter on defense, but the back line played very well. It looked like they'd been playing together for a while.

Of course the real test will come against better opponents. The tone for the team is cautiously optimistic. They are good, but they can get better.

"I was pleasantly surprised. I thought we did a really good job," said Dixon. "I think our passing game was really good tonight. We've been working a lot in practice playing keep-away and I think that really helped us. We were moving for each other and getting open for the pass."

"I feel really good about where our team is at," said Braly. "We're working toward January so we peek in the state tournament."