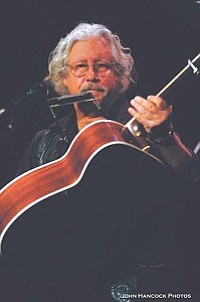 JEROME - Filmmaker ML Lincoln resurrects Edward Abbey's spirit with her upcoming documentary Lines Across the Sand. The film is a timely and entertaining reminder that there are still heroes with the courage to take a stand and say, "this far, and no farther."

Music legend Arlo Guthrie sings the opening theme for the film, Billboards in the Sky, written by the late Gerry Glombecki, an inductee in the Arizona Blues Hall of Fame. The film promises to be an environmental cult favorite. Guthrie is best known for his underground anthem and subsequent film Alice's Restaurant, among many other quintessential folk classics.

Abbey's novel, "The Monkey Wrench Gang" is the unifying thread in this film that addresses the plight of the American Southwest uniquely and with a sense of humor reminiscent of Abbey himself. Focusing on the real people behind the book's characters Doc Sarvis, Seldom Seen Smith, Bonnie Abzug and George Washington Hayduke, the film explores their fearless (if mischievous) commitment to protecting wilderness.

"This film gives a voice to those, both young and old, who participate inside the activist community," said Lincoln, "I am thrilled that Arlo had an interest in the project. He's such a national and international treasure."

ML Lincoln is an award-winning photographer and filmmaker. Her 2007 documentary Drowning River has received several festival awards. The film, featuring singer/songwriter/activist Katie Lee, tells the story of this eloquent and feisty woman's 50-year battle against the Arizona politics and corporate agendas that 'murdered' her beloved Glen Canyon.

Lines Across the Sand is currently in post-production and expected to hit the festival circuit in 2011.  For more information, visit www.linesacrossthesand.com.