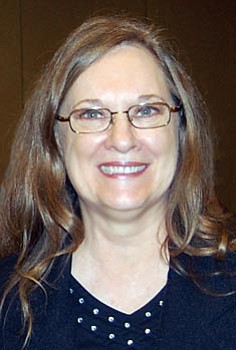 Diane Joens is seeking another term as mayor of Cottonwood and is being challenged by John Ask.

COTTONWOOD - Cottonwood Council members and their mayor have now filed nomination papers and submitted signatures to run for re-election. But four additional candidates have lined up to challenge their seats.

The primary election is scheduled March 8 in Cottonwood and Camp Verde. If a runoff is needed, candidates would advance to the May 17 General Election.

All the hopefuls were required to file paperwork by the close of city offices Wednesday evening. Eight out of nine residents who picked up campaign materials returned them to the Clerk's office.

The sitting members that will attempt to run again include Mayor Diane Joens and council members Duane Kirby, Terrence Pratt and Darold Smith.

Ruben Jauregui, a former council member and mayor, has also submitted paperwork He was defeated by current Mayor Diane Joens during the last election, but he is only seeking a council seat during the new run.

Others, who are newcomers to the council campaign, include Mary Eichman, Jesse Dowling and John Ask. Ask is the only other candidate who has pulled paperwork to challenge the two-year mayoral position.

City Clerk Marianne JimÃ©nez says a candidate needs to submit no fewer than 48 and no more than 95 valid signatures along with financial disclosures and related paperwork.

The City Clerk's Office must now verify that the paperwork is in order before the eight will official be qualified for the March Primary Ballot. An announcement is expected Friday.