When the Smoke Clears: Consistency seen as solution to local marijuana dispensaries 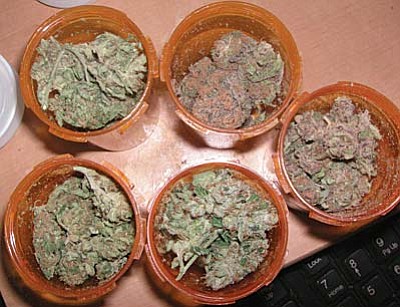 How medical marijuana dispensaries will be zoned and enforced is part of a county-wide discussion. File photo

VERDE VALLEY - It is difficult to say what the response to the medical marijuana initiative will be once the smoke clears, but one thing is for certain, local communities and the county see it as a regional problem solved by consistency.

They all agree they must continue working together.

This week the Arizona Department of Health services released a draft policy, which will be key to what takes place. The policy (see related story) is now open to public comment. A final policy will be drafted by April 1, after which those wishing to open dispensaries can begin making their plans.

Yavapai County Development Service Director Steve Mauk says his agency has several issues with the new law, but feels the biggest concern for everyone is preventing unregulated growing.

Under the new law, patients with a prescription who do not live within 25 miles of a dispensary will be able to grow their own -- a tough obstacle given the remoteness of many communities within the county.

"When the law first passed the reaction from many in the planning community was to zone these things out of existence. But after studying the law we realized it is actually in our best interest to have dispensaries, because the alternative is unregulated growing," says Mauk.

Mauk says at his biggest issue is not the regulation of dispensaries, but how they are placed geographically.

"We need to disperse them in such a way that we can limit the possibility of unregulated growing. We feel with five strategically placed dispensaries we could mitigate most of the problem," says Mauk.

Mauk says he feels by evenly spacing the dispensaries it would also eliminate the possibility of concentrations within one area, which could become a law enforcement issue.

Land use issues such as these are at the top of the list for local municipal planners.

According to Camp Verde Town Manager Russ Martin, local municipalities know what they have to do.

"I thing we all agree that we need to incorporate commonalities with each community. We need to come up with something that is consistent throughout the valley so one jurisdiction is not seen a place that is easier than another to get a dispensary," said Martin.

Draft ordinances, some created by local planners and one written by the League of Arizona Cities and Towns, are currently being passed around.

"I think we all agree that at this time that for us it is a land use issue, more than anything," says Martin.

Cottonwood City Attorney Steve Horton has compared the situation to regulation of adult businesses that challenged municipal planners a few years ago.

"There are similar attributes to both uses that are now protected under law, but in which the community has a real stake in making sure they occur in a properly and reasonably-regulated manner," says Horton.

Martin agrees and believes that if the issue is handled correctly, it will take care of itself.

"If we address this in a professional, non-emotional manner," he says, "within a couple years we won't remember there was ever a problem."

PHOENIX -- The top state health official says buyers of medical marijuana should know when the plant was grown, whether pesticides were used and even how often it was watered.

But you're on your own if you want to know if you're getting the good stuff or just ditch weed.

That's the way the Department of Health Services is crafting rules for the state's new medical marijuana law set to take effect in March.

Those rules, which are now being circulated for public comment, include:

 Requirements on how often a doctor needs to have seen a patient before being able to recommend marijuana;

 A mandate that each dispensary have a medical director on staff to educate patients and answer questions;

State Health Director Will Humble said the rules also will spell out that the only place patients can light up to "medicate' themselves is pretty much in the privacy of their own homes or yards. Smoking on a sidewalk or in a public park -- places where cigarettes are permitted -- will be off limits.

And if someone needs medication in the middle of the day?

"The prohibition applies to the SMOKING of marijuana,' Humble said.

"We want to be sensitive to others in the community who may not believe that this is a good idea,' he continued. "They don't want their kids to see people smoking marijuana, for example.'

But there is a loophole of sorts which would allow self-medication any time, any place.

"You could still CONSUME marijuana if it was infused into a smoothie or a brownie or some other mechanism where you could ingest it,' he said.

The rules are the outgrowth of voter approval last month of Proposition 203. It allows those who have a specific recommendation from a doctor to obtain up to 2 1/2 ounces of marijuana every two weeks.

But Humble, having seen the specialty walk-in "clinics' that sprang up in California and Colorado, is moving to ensure that doesn't happen here. So the proposal includes a fairly restrictive definition of what constitutes an "ongoing physician-patient relationship' which is necessary before a doctor can actually recommend marijuana.

"One option is that this has been their patient for at least one year and they have had four visits with this patient over any period of time,' he said.

Humble conceded, though, there are situations where someone may have a newly diagnosed condition that fits within the legal definition of what can be treated with marijuana. For example, he said, someone may have just been diagnosed with breast cancer, be undergoing chemotherapy, and want marijuana to treat the nausea.

In those situations, Humble said, a recommendation could be written by a physician who has done a complete medical history, done a physical examination "and is committing to primary responsibility for the management and routine care of the patient's debilitating condition.'

In both cases, he said, the restrictions should preclude a doctor from just hanging out a shingle as a marijuana specialist to attract new patients -- patients he or she never has seen before and never expects to see again.

But Humble said his agency won't be second-guessing doctors who, if they meet the requirements of the rules, issue the necessary recommendation for a patient to obtain marijuana.

That still leaves the question of quality control.

Humble's rules would require that drugs offered for sale at a state-regulated dispensary be labeled with everything from when the plant was grown and how often it was watered to whether it was treated with pesticides or fertilizer.

But buyers are on their own in their effort to find the good stuff -- the plants with the highest quantity of tetrahydrocannabinol, the psychoactive ingredient in marijuana.

"But we haven't gone that extra step to require an analysis to determine exactly how much THC is in every single piece of inventory,' he said. "And I doubt that we're going to go there.'

Humble said even if he wanted the state in the business, there are too many variables even among the same strains of marijuana, such as how the plants were grown, to make such analysis worthwhile.

Much of what is in the proposed rules involves how the marijuana dispensaries can operate.

There are no limits on hours or locations. Humble said those are being handled by each individual community through zoning regulations.
Report a Typo Contact
Sign up for our e-News Alerts
Most Read
7 days
30 days