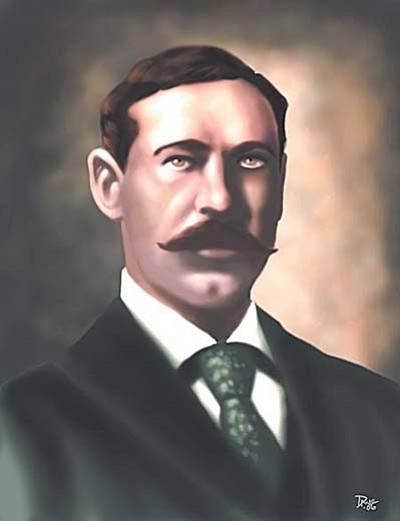 But unlike a modern-day rock star, whose life is spent in the limelight and whose every move is documented in one fashion or another, Mindeleff's life has remained a mystery.

We know that the great explorer John Wesley Powell hired Cosmos and his brother Victor in 1881, when Powell was the director of the Bureau of Ethnology in Washington, D.C., to come west for the Smithsonian Institute and survey the great pueblos of Arizona and New Mexico.

And we know that modern day archaeologists have long been awed by the proficiency of their work, which is considered as accurate today as it was then.

We also know Victor left the Smithsonian in 1890 to pursue a career in architecture and that Cosmos continued to come west.

In 1891 he came to Arizona to complete the stabilization of the Casa Grande ruins. However, when the work was stopped due to a shortage of money, he set off for the Verde River to check out reports of extensive ruins found along its path.

By the time he finished, he had catalogued more than 50 major sites. But perhaps most importantly, his powers of observation set the stage for the modern study of archaeology.

"From his survey work he was able to understand environmental relationship, land use and settlement patterns. It is the kind of interpretation that does not happen in American archaeology until the 1960s," says Peter Pilles, archaeologist for the Coconino National Forest and an admirer of Mindeleff's work.

But the man who was ahead of his time, became lost in time. According to one biographer, Cosmos "faded into obscurity," not unlike the lost civilizations he came to study, shortly after the results of his Verde survey were published in 1896.

One biographer said he began writing for architectural journals. Another said he "married well and moved to California."

Recently, though, the missing second half of Cosmos Mindeleff's life has come to light, thanks to the persistence of one of his distinct relatives.

Mindeleff's great-grandnephew, Bill Korstick, has spent nearly 30 years looking into Cosmos' past. After reading a 2008 story written in The Bugle that stated Cosmos' past was a mystery, he wrote to say he had finally found what he was looking for.

Two months ago while searching the Internet, Korstick discovered a website that featured an online search engine for newspapers published in New York state.

On that website he found an obituary for not only Cosmos, but for his wife -- the real one, not the imaginary rich one with whom he was to have escaped to California.

According to the new documents, after Cosmos left the Bureau of Ethnology he became a newspaper reporter, working for New York Sun, New York World and the New York American.

He continued to travel extensively, living in Paris, London and Florence, Italy, serving as the foreign editor for the New York Sun. Stories published in the Sun also indicate he reported from Russia during the Bolshevik Revolution and from Europe during World War I.

His wife Marion's obituary also fills in a blank as to who accompanied him during his survey of the Verde. It states that she "was with him when he made the first scientific study of the cliff ruins of the Rio Verde," and often traveled with him for six months out the year, "most of the time in the saddle."

After leaving from the newspaper business, Cosmos and Marion retired to Carmel, N.Y. She died in 1933, Cosmos in 1938.

"It's an aha moment because he is such an important figure in archaeology, and because his writing was so far ahead of its time. It's been flabbergasting to many of us that he simply vanished off the pages of history as well as the archaeological record,"says Pilles

Pilles also says that, remarkably, the articles are the first anyone has seen or heard of his wife Marion.

"Taking along wives seems to have been a characteristic of the Smithsonian expeditions. We know Jesse Walter Fewkes, who was the next to come to the Verde after Mindeleff, brought along his wife."

The new information will give biographers an opportunity to look in new spots for more clues to the long lost archaeologist's life, says Pilles.

"Nobody until now has been able to find out what happened to him after he left the Smithsonian," says Pilles. "Now the big question is, are there any photos of him to be found?"