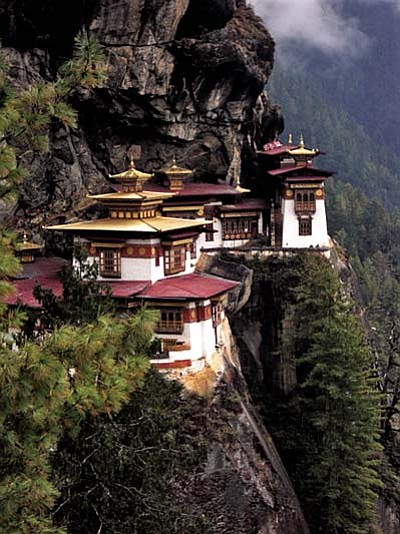 The Taktshang Monastery is also known as the "Tiger's Nest."

CORNVILLE – “I’ve never been to a country that is more fascinating,” said Joan Forest, 80, of Cornville. She is talking about Bhutan, a small landlocked country in South Asia.

Joan has traveled to many countries, including many Third World countries. Seldom has she been as impressed by a country and its people as she was during her trip to Bhutan from Nov. 8 to Nov. 21.

The parliamentary monarchy of Bhutan sits at the eastern end of the Himalayas. It is bordered to the south, east and west by the Republic of India and to the north by the People’s Republic of China.

Joan Forest said the people of Bhutan and their king take the happiness rating very seriously. “They have an institute and standards, and they measure it,” she said. “That is a big part of Buddhism.”

Some of what is measured in Bhutan’s National Gross Happiness includes the Gross National Product, providing the necessities such as food and shelter for its people, protection of the environment and maintaining traditional architecture and dress.

Although Bhutan has a palace for its government, the king – who was educated at Oxford - lives in a tin-roof house. He is most interested in connecting with the people and helping to solve their problems, according to Joan.

There are at least half a dozen languages, but that actually makes it easy for Americans to communicate in Bhutan. “I had no problem because everybody speaks English,” Joan said. That’s because they have so many languages that they all speak English to each other. English is taught from first through sixth grades.

Joan said the people of Bhutan were very willing to speak to her an others in her group. “They were very frank with us,” she said. “They didn’t cover up their problems. They told us what their problems are and what they are doing about them.”

Joan, a retired marriage and family therapist, made the trip with her son, grandson and daughter-in-law. They traveled with a group of 16 Australians.

“We went to a lot of temples,” she said. “They are a very, very religious people.”

Joan and her group hiked to a monastery at 12,000 feet, and during that hike had to go through a pass at 13,000 feet. “The only way to the monastery is by hiking,” she said. Even the king hikes to the monastery to be blessed.

“I wish I’d gone to Bhutan 10 years earlier,” Joan said, “because the altitude really got to me.”

Food also was a problem for Joan. “They love their food hot,” she said. But she said her guides tried very hard to make at least one dish with each meal that wasn’t so spicy hot. She said that although the people of Bhutan are primarily Buddhists, they do eat meat, especially a lot of stews.

Their homes are huge and multi-generational, Joan said. Even in the urban areas some of the homes were large enough to hold more than a single generation of a family.

Joan was impressed with the accommodations in Bhutan. “They have beautiful hotels,” she said, “more luxurious than anything I’ve seen.”

Her group spent one night in a farmhouse near a festival they wanted to visit. She said most families are subsistence farmers. The farm she visited had cows and chickens and grew turnips.

Overall, Bhutan is becoming more modernized. In recent years television and the Internet have been introduced, and within the last 10 years a couple of major roads have been built. “Cars are coming in,” Joan said.

“They’re trying to modernize without Westernizing,” she said. “They don’t want to lose their identity.”

The King of Bhutan wants to modernize so that his people will be more closely aligned with the West than with China, which remains a threat to the small country.

The country has bars and nightclubs and some growing problems with alcohol and drugs. Joan says they are very aware of those problems and are working to solve them.

Men and women wear traditional clothes to help maintain their heritage. “They seemed to be very comfortable wearing it,” Joan said.

She said that what impressed her most was, “the influence of their spirituality on their daily lives. It was just so positive.”

She also was impressed with how the people of Bhutan reacted to Joan and her group. “They just loved us to death,” she said. “They shared their life stories with us.”