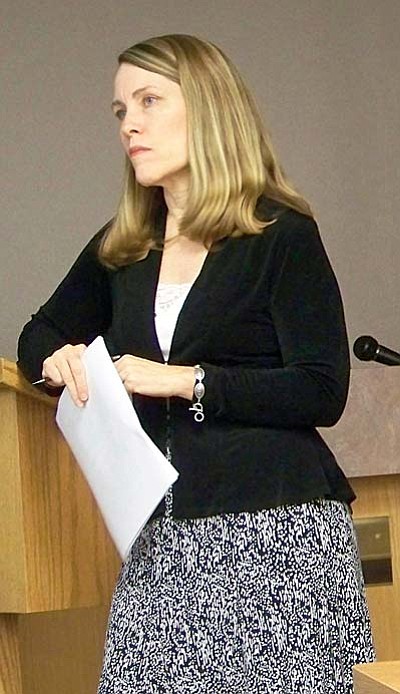 Soon after receiving the grant, the town hired Jodie Filardo as the CSP project manager.

CLARKDALE - The Clarkdale Sustainability Park was in the news throughout 2010. In October 2009, the Town Council voted unanimously to direct staff to move forward on a proposal for the sustainability park.

Mayor Doug Von Gausig was the driving force behind the park. "This project will eclipse any other project the town of Clarkdale has ever undertaken," Von Gausig said.

He described the sustainability park early on as having the function of supplying all the electrical energy and much of the liquid fuel that Clarkdale will need through a combination of solar arrays, plasma conversion, photobioreactor fuel and biodiesel facilities.

Since then, the actual make-up of the park has become much less clear. Now it is more of a philosophy of sustainability throughout the town. The park does not have a location and may end up being spread throughout parts of the town.

One of the most important parts of the project, as stated by Von Gausig in 2009, was to be working with property owners. He said the park would require about 500 acres. At that time, Von Gausig thought the best bet would be to work with Freeport McMoRan Copper and Gold toward locating the park on the company's property around Peck's Lake.

In mid April the council voted to authorize an application for a $156,000 grant from the Walton Family Foundation. The grant, if awarded, would be used for a feasibility study and to hire a project manager for the sustainability park.

In mid-June, the town was notified that it had been approved by the Walton Family Foundation for a $475,651 grant. The grant would be for 18 months and would be divided between the park and the Verde River Basin Partnership. The Clarkdale Sustainability Park's project management team would get $225,250, and the VRBP would get $250,401.

Soon after receiving the grant, the town hired Jodie Filardo as the CSP project manager.

In mid November, Von Gausig received a letter from Freeport-McMoRan declining a January proposal for the CSP to be located on land owned by the company and known as the Verde Valley Ranch. The mining company declined to donate the land to the sustainability park.

Two of the original three sites identified by the council for the CSP are still being considered. One of those is a 594-acre parcel owned by the Clarkdale Metals Corp. It is located in the northern portion of Clarkdale. The second site is a 522-acre parcel owned by Verde Exploration, which sits entirely outside of town but has access off SR 89A.

In late April Clarkdale began looking at options for Highlands Development. The town had entered an agreement in 2005 with Town and Land Design Group, the original developer for the property known in the past as Cliffrose and Verde Highlands. That company went belly up, and the project had been taken over by PTM Enterprises, LLC.

Because the original developer failed to complete its agreement with Clarkdale to build a new wastewater facility, the new developer, John Tobias, cannot proceed with the project until a wastewater solution is found. Before the project was shut down 46 lots were sold. Those landowners cannot build on their properties until the wastewater problem is solved.

In April the council discussed a proposal from the Highlands development owner and his project manager, Steve Biasini, which relied on the town allowing use of temporary septic systems on 80 lots.

The council decided to pass on the septic systems. But the developer and town agreed to keep working on the proposal and come back to the council.

During a special council meeting Aug. 31, the council approved an amendment to its development agreement with PTM Enterprises. The amendment was designed to allow the developer to move ahead with the project. That amendment provided a framework for both an interim wastewater solution and a permanent solution that works for both parties.

The amendment does not include any septic systems. Instead, it provides a guide for the town and developer to work toward a permanent wastewater treatment agreement. It also provides specific conditions under which the developer might proceed with an alternate plant if plans for a permanent plant are not finalized within a certain timeframe.

A 50/50 matching state grant-in-aid for $10,000 came from the Arizona State Library Archives and Public Records. Clarkdale matched the grant from donations through the Clarkdale Library Advisory Board. That money was earned over many years of fundraising, including the annual Fourth of July Ice Cream Social and December book sale.

The library project was completed on time, and the building reopened Oct. 11.

The Clark Memorial Library is housed in a building that was built in 1930 and was originally the Clarkdale Community Church. It later became the Methodist Church. The town purchased the building in 1992 for the library.

A Jump In! Open the Pool Committee was formed in August to raise money to reopen the Clarkdale Public Pool.

The pool was closed for the 2009 and 2010 seasons due to a dramatic decline in revenue. It is estimated that it will take about $75,000 to reopen the pool.

The town has received numerous donations totaling more than $20,000.

Gantry Constructors, Inc. was the first with a donation of $8,500. Since then individuals and organizations have stepped forward to support the project.