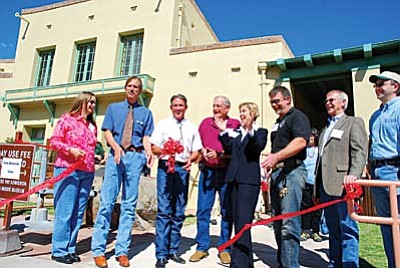 The highlight of the past year in Jerome came when the Jerome State Historic Park reopened in mid October. A partnership among the Yavapai County Board of Supervisors, the State Parks Board, the Douglas family and the Town of Jerome gave the park new life.

JEROME - Perhaps the best news for people in Jerome during 2010 came when the Jerome State Historic Park reopened in mid October.

When the popular state park closed suddenly in February 2009 because of budget sweeps and needed repairs, the outlook was bleak that it would reopen anytime soon. But a partnership among the Yavapai County Board of Supervisors, the State Parks Board, the Douglas family and the Town of Jerome gave the park new life.

Chip Davis, county supervisor for District 3, convinced the board to kick in $30,000. The State Parks Heritage Fund came up with grants for the project, and the Douglas family chipped in $15,000 for repairs.

The park will operate from 8:30 a.m. to 5 p.m. Thursday through Monday each week. Admission will be $5 for adults and $2 for children.

The Douglas Mansion - the centerpiece of the state park - was built in 1916 by Jimmy "Rawhide" Douglas. It became a state park in 1965.

Douglas designed the mansion as a home for his family and as a hotel for mining officials and investors. Originally, the mansion featured a billiard room, wine cellar and steam heat.

It was built from adobe bricks made on site.

Now the museum features many exhibits, mining artifacts, photographs, minerals and a three-dimensional model of Jerome with its underground mines and tunnels.

Ordinance 380 amended the town's zoning ordinance to include viniculture as a conditional use in the portion of town zoned for agriculture and residential. Ordinance 381 defined viniculture by setting the maximum number of vines per half acre at 100 for domestic use. The council was careful not to infringe upon the right of private parties to grow grapes for personal use.

The council had worked for many months to define how viniculture would be allowed in the town's AR zone. During the process, a stakeholders committee was formed to advise and make recommendations to the council.

A definition of viniculture was necessary in the ordinance to create classifications for commercial and domestic grape production.

Commercial viniculture operations will pay a $5,000 fee for a dedicated water meter to regulate water use.

On Dec. 8 town officials closed the Jerome Grand Hotel. A news release on that date stated that, "It was deemed as unsafe by the town's fire official and chief building code official, resulting in its closure following check-out of its guests (Dec. 9)."

The Asylum Restaurant, located at one end of the hotel, was allowed to remain open but closed off to the rest of the hotel.

The Altherr family purchased the historic building in 1994 from Phelps Dodge Mining Corp. The hotel had been closed for 44 years. It was built in 1926 and opened in 1927 as the United Verde Hospital.

The hospital closed in 1950 when mine operations began shutting down.

Following the revocation of the hotel's certificate of occupancy, Robert Altherr told The Verde Independent that his attorney would likely file a multi-million dollar lawsuit against the town along with a request for an immediate injunction. He said the filings would be done in Yavapai County Superior Court.