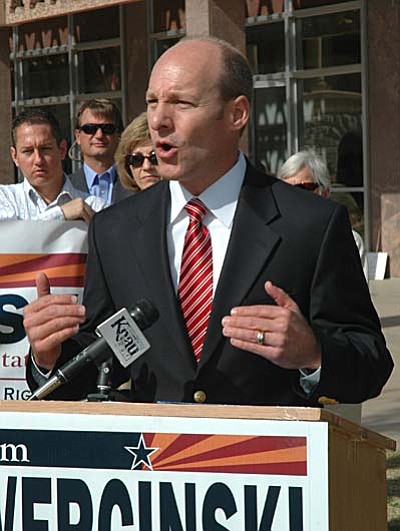 Sam Wercinski pointed out the post is the state's top election official. He said more can be done to educate voters to ensure that all ballots are counted and are not disqualified because people did not bring the proper identification or even did not show up at the right polling place.

But the central issue in the race is likely to be who voters believe is most qualified to be governor.

The reason for that is that the secretary of state is first in line of succession if the governor quits, dies or resigns. And Arizona has a long history of that happening.

Just last year, Janet Napolitano resigned to take a job in the Obama administration. That elevated Jan Brewer who had been elected secretary of state in 2002 and again in 2006.

And the secretary of state has become governor four other times dating back to 1948.

Wercinski cited his experience as a veteran, a business owner and the real estate commissioner under Napolitano.

"I had the opportunity truly to serve and help individuals by the thousands through this tough time,' he said.

"With that background I believe that I have the capability and the capacity to encourage cooperation, to bring state leaders together as we should see in a governor to move Arizona into the future.'

Wercinski faces opposition in the Democratic primary from one-term state Rep. Chris Deschene, D-Window Rock. The survivor will face off against incumbent Republican Ken Bennett who was appointed to the post last year after Brewer became governor.