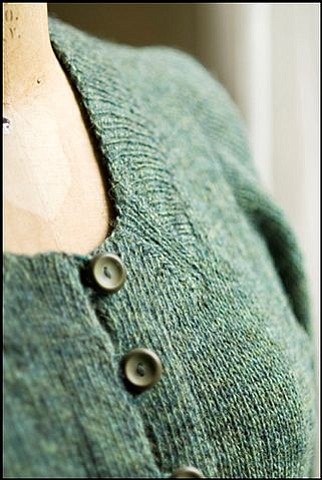 The FA group had a wonderful get together on Saturday February 6th. We gathered at Jeroma Café which is across the street from the Post Office on Mingus. Nice and warm, lots of room, good food and very nice staff. Nancy and I had an idea that we wanted to share with the group. We have both decided to knit Elizabeth Zimmermann's Green Sweater. We found it interesting and we wanted to see if anyone else wanted to join us in a "knit-along". A Knit-along is a group of people knitting the same project at the same time. This way they can compare techniques and share problems or discoveries as they go along. It is like a study group. We have several knitters thinking about joining us.

Now I have to tell you, this pattern excites me beyond measure! It is a sweater that reappeared out of seemingly no where. The sweater was designed and knit by Elizabeth Zimmermann for her God-Daughter in the early 1950's. It was worn by several family members, quite often I understand, though out the almost 60 years it has been in existence. That is a testimony to Elizabeth's amazing classic sense of styling and choice of sturdy wool! This well loved sweater is worse for the wear. The holes were mended with thread that cut into the wool. The owner, Elizabeth's God-daughter Joan had requested that Sunday Holm repair the sweater. Sunday was not able to do that, it was too far gone and the wool was no longer being made. So she went over that sweater for months, stitch by stitch reinventing Elizabeth's creation. Elizabeth never wrote the pattern down, as was often her way...she knitted from her amazing head. Well Sunday recreated the sweater for Joan and wrote the pattern out! Meg Swansen, Elizabeth's daughter, who owns and runs Elizabeth's knitting store, Schoolhouse Press, now carries this pattern and did some researching of her own and was able to find and convince the mill that made the original yarn to bring it back into existence! It is a single ply sport yarn with that good old fashioned wool smell; the twist is what is called an energized twist. That is a fancy way to say it kinks a bit. But when you take the skeins and put them in balls and let them rest a couple of days it calms down. I did a gauge with my yarn and was transported to the days I first learned to knit on good sturdy wool. Even Claire my cat was fascinated with the clean wool smell. She is normally a ball of fire around yarn and needles, but all she wanted to do was smell the yarn with her eyes half closed.

I have been a fan (groupie) of Elizabeth Zimmermann since the late 1970's. At that time I was knitting from patterns, line by line, stitch by stitch, always had the pattern on my lap and would go from knitting to reading. If something was wrong with the pattern I had no idea what it could be. I had no instinct as to how to see a project and adapt it to my needs. Then, while working in a yarn shop in Napa California, I read about an amazing lady back east who was of British decent and was talking common sense about knitting! She spoke in this article like a dear Aunt who was straight forward and full of insight and information about knitting. Math, my dear readers! She used good ol' math to make wonderfully fitting classic garments. The first book of hers that I read was "Knitting Without Tears" and the very first chapter is called "The Opinionated Knitter", and so she was! This book and her following books changed my life! It was the point when I was able to say, it is MY knitting! I adapt almost everything I knit and actually seldom use patterns other then as a very loose guideline. I will how ever follow the Green Sweater Pattern pretty darn close; Elizabeth has some details that only she could come up with, and such clever ways to do it. Learning new techniques from Elizabeth and a treasure re-discovered, years after her passing is what really excites me about this project. Elizabeth is the Goddess of Knitting to me. And I highly recommend reading any and all of her books if you are a serious knitter.

All Hail E.Z.!!! Teaching us from the other side! Now that is talent!!!

History Corner: More wool is grown in Australia then anywhere else in the world. Russia ranks second, New Zealand third.

"THE GREEN SWEATER CONTINUED"
Will it ever end?
THE MAGIC OF A GAUGE SWATCH
EZ KNIT-A-LONG WEEK TWO
Steeks!!!!