J.D. Hayworth makes it official; he will run for McCain's U.S. Senate seat 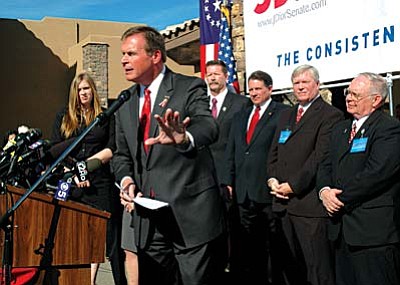 PHOENIX -- With a blast at what he called John McCain's liberal leanings, former Congressman J.D. Hayworth launched his bid to oust the four-term incumbent in the Republican primary.

At an event outside his Phoenix headquarters Monday, Hayworth hurled broadsides at the senator, saying McCain is on the wrong side of all the issues important to GOP conservatives. That includes the incumbent's call to close the prison for enemy combatants at Guantanamo, his support for some sort of cap-and-trade system of cutting pollution, his vote for the Troubled Asset Relief Program to help bail out financial institutions and his efforts to limit campaign spending.

And if that weren't enough, he uttered the dreaded H-word.

His bid got an immediate boost Monday when Chris Simcox shelved his own Republican campaign against McCain to throw his support behind Hayworth. Simcox, a founder of the Minuteman Civil Defense Corps, said his supporters told him the move was necessary to have a united conservative front.

The race shapes up to be one of the most contested -- and potentially divisive -- intraparty campaigns in Arizona history.

McCain, hoping to shore up support for his nomination and election, set off this week on appearances around the state. That began Monday with a press conference in Tempe to announce his endorsement by 31 mayors from around the state. He also scheduled appearances this week in Thatcher, Flagstaff, Yuma, Phoenix, Tucson and Payson.

While McCain seeks bipartisan support, Hayworth pokes fun at the incumbent's working with Democrats. Instead, Hayworth, who served 12 years in Congress before being defeated in 2006 by Democrat Harry Mitchell, is making a clear bid for the backing of those who identify themselves as part of the Tea Party movement.

While that may work in a Republican party, it remains unclear how that plays out in a statewide general election.

In 2002 and again in 2006 Republicans chose those who identified themselves as conservatives to run for governor. Democrat Janet Napolitano won both times.

Those same years the Republican candidates for attorney general came from the GOP's conservative wing. The result was victories for Democrat Terry Goddard.

But Hayworth told Capitol Media Services he doesn't foresee his nomination as giving a political leg-up to Rodney Glassman, a Democratic city councilman from Tucson.

He said things have changed since then.

"The political wind is at our back,' Hayworth said. "People recognize that the change they need is conservative change, not someone who's going to go there, as Mr. Glassman would, and be a rubber stamp for Barack Obama.'

McCain, however, at his own press conference Monday, acknowledged the strength of the Tea Party movement but claimed them as his own backers, citing the endorsement of Sarah Palin, his 2008 vice presidential running mate.

"I am a fiscal conservative,' he said. "I'm the one who stood up and fought against earmark projects that Mr. Hayworth so proudly proclaimed that he would get for his congressional district.'

And McCain took his own shot at Hayworth, saying the practice of earmarks leads to corruption, citing the example of lobbyist Jack Abramoff. The U.S. Department of Justice investigated Hayworth's ties to the convicted Abramoff, though that inquiry resulted in no charges.

Hayworth said he does not believe that a brutal primary battle would leave whoever survives too politically scarred to win in November. That's what happened in the 1970s when two GOP congressmen, John Conlan and Sam Steiger, battled it out, with Democrat Dennis DeConcini from Tucson snatching the seat in November.

"I believe that a good, old-fashioned primary is a good thing for the party,' Hayworth said. "It will help both John and I prepare for the general.'

On that point, McCain agreed.

"I've been involved in primaries before,' he said. "I'm confident the people of Arizona again will judge me not on what I have done for them but on what they think I can do for them in these most difficult times.'

Hayworth was careful to thank McCain, a former prisoner of war, for his military service, and even admitted campaigning for the senator during his failed 2000 presidential bid.

"He still fights hard, all right,' Hayworth said. "But too often, for the wrong causes.'

Gary Grado of Tribune Newspapers contributed to this report.