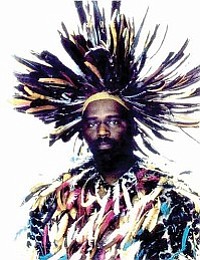 Keith Johnson, Vusi Shibambo and the Arizona Dunan Ensemble will join together to present an evening of African drumming and dance at the Old Town Center for the Arts (OTCA), on Saturday, Feb. 27, at 7:30 p.m.

Weaving traditional music, storytelling, and traditional dress these rhythm makers will take you on a journey of entrainment that "begins in your toes and moves deep into your heart." The sound and rhythm of African drumming is a primal event. It is a shared expression that many ethno-musicologists recount as being at the center of our collective consciousness, as the branches of the human tree trace back to the African continent.

The evening will feature solo, duo and ensemble playing by some of the finest drummers in Arizona. Keith Johnson has been at the forefront of African drumming since the 1980's when he moved to Phoenix from the Washington, D.C. area. He has performed with many drum groups, including Kawambi, the premier African drum ensemble in Arizona, and has founded many groups as well. As a roster artist for the Arizona Commission on the Arts, Keith has been one of the most sought after artists for the past three decades, and has taught and performed for thousands of Arizona students. During countless residencies Keith has demonstrated the importance of drums in West African life and culture, the significance of 'rhythm' and why the instruments are crucial to that culture Keith has traveled to West Africa on many occasions to study and bring back a variety of West African percussion instruments including the djembe, kora, talking drums, and shekare,

Bab Shibambo is a multi-instrumentalist, playing percussion, the African Djembe, udu, conga, Azhiko, and nagara drums, marimba, mbira (kalimba or finger piano), as well as the Bushman's haunting berimbau. Born in South Africa, Bab is one of the Shangaan people. Shimbambo translates into English as "guardian of the skins." Keepers of the Rhythms and the Royal Shimbambo family ancestors were esteemed for their vital position in the community as caretakers of the tribe's animal skins for clothing and drums. Simbambo dreamed of continuing in the family drum tradition, which he now passes on to his son Manqhoba, "The Victor." His goal of preserving the music for present and future generations has culminated in his new CD African Skies on Skin, which commemorates the 10th anniversary of the first democratic elections in South Africa and celebrates the children of South Africa who stood up against the apartheid regime in 1976.

The Arizona Dunun Ensemble is a drum group comprised of players from Sedona, Cornville, Cottonwood, Prescott, and Flagstaff, Arizona, who specialize in West African percussion. The Ensemble is dedicated to learning traditional rhythms and songs, which accompany the Djembe, or "Jebe Bara," which means Drum of Unity.

Over the past two decades the Djembe (JEM-BAY) has become a hugely popular instrument all over the world; and in the United States it is often played without regard for African technique, tradition, and culture. Out of respect for tradition the AZ Dunun Ensemble believes these aspects should be remembered when playing this instrument; and they strive to keep the Djembe in its traditional musical context, hence the name Arizona Dunun Ensemble. In West Africa, the Djembe is almost always accompanied by one or more Dunun, a two-headed cylindrical drum played with a stick. The Dunun (pronounced Doo-Noon) is vital to Djembe music. It is the engine that provides the "bass" notes and the melody.

Audience members are encouraged to bring a percussion instrument to join in the "World Drum for Peace Song" that will be improvised and led by Keith, Bab and Bob from the Dunan Ensemble. To learn more about the Djembe and traditional rhythms you are invited to attend class at Studio B (next to OTCA) on Mondays at 6:45 p.m. Contact Bob at (928) 271-5576.

OTCA is located at Fifth Street & Main in Old Town Cottonwood. Tickets for this special 'drumming event' are $12 in advance, $15 at the door, and $12 for seniors. Tickets are available online at showtix4u.com. Tickets are also available in Cottonwood at La Bella Café (next to OTCA), Jerona Java Café, Desert Dancer; and in Sedona at Crystal Magic, and Golden Word Bookstore. For upcoming events, visit www.oldtowncenter.org. For further information, contact Elena Bullard at 634-0940.