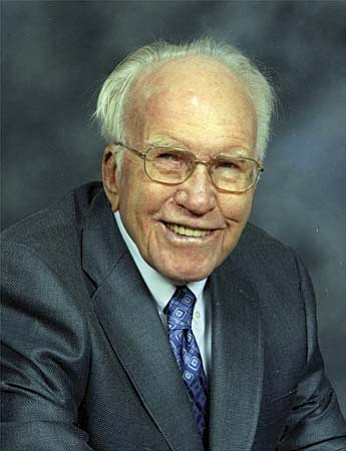 Mr. Pendley was born February 22, 1923 in Clemenceau, (now Cottonwood), AZ to Frank and Jane Pendley. Tom grew up on the family homestead at Slide Rock, north of Sedona, where they raised apples, peaches, and pears, which they sold at their roadside store.

He married Dorothy Diers in 1955 and returned to manage the family farm in Oak Creek from 1963 to 1985. Tom recognized the vulnerability of the orchard crops and added sweet corn to the produce raised at Slide Rock. He developed a loyal following of customers looking for that “picked this morning” freshness that had disappeared from the local markets.

Tom’s passion for quality fruits and vegetables was the motivation for his collaborative effort in the foundation of the Coconino County Fair. He fought for the rights of the family farmer at a time when government and developers were exploiting nature’s wonders.

Tom worked tirelessly to make the family farm a success and to preserve the natural beauty for generations to come. Through his efforts and those of Governor Bruce Babbitt, Slide Rock became a State Park in 1985 and has since become one of the most popular State Parks in Arizona.

Tom and Dorothy enjoyed retirement by traveling to destinations in Alaska, Europe, and Mexico. Between trips he continued farming by raising tomatoes in his backyard garden; always with the emphasis on flavor over appearance. Tom brought the flavor of life to a family that will miss him dearly.