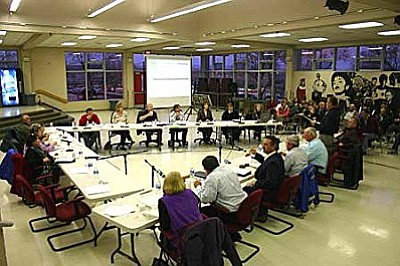 MUHS and C-OC school boards met Tuesday night in joint session to discuss the possibility of unifying the two districts.

COTTONWOOD -- Mingus Union High School and Cottonwood-Oak Creek districts are taking another look at unification. This time it will be the two governing boards that decide, not the state. State law allows the boards to unify through resolution. An election is not required.

Both school boards discussed the idea of unification Tuesday night in a joint session held at Mingus Union. Board members and administrators from Clarkdale-Jerome School District attended the meeting, but they gave no indication of being interested at this time in turning the unification into a consolidation that would include their district.

Superintendents and business managers from both MUHS and C-OC led the joint boards through a PowerPoint presentation covering the basics of how unification would work and some of the major issues to be resolved.

C-OC Superintendent Barbara U'Ren started the presentation by saying the objective would be to find out, "How do we get more dollars in the classroom?" She said the governing boards can make the decision to unify.

Although some support seemed to exist for the first timeline, much of the discussion leaned toward the second timeline of creating the unified district - if that is in fact the way the boards decide to go - in July 2011.

Salary equalization between the two districts is one of the biggest issues that would have to be worked out.

"It's about $1 million," U'Ren said. "That's just for salaries." There was a general consensus that unification would not be possible without financial help from the state.

Administration members from both districts met with State Sen. Steve Pierce (R) Dist. 1, and State Rep. Andy Tobin (R) Prescott to discuss unification. "We took to them some of the issues raised over the years," U'Ren said.

In short, Pierce and Tobin were optimistic about the state helping the unification process with money for salary equalization and some "session law" tweaking to state law.

Several board members expressed doubt that the state legislature could get anything done in the timeframe the two districts would need in order to unify and solve the salary equalization issue. "The wheels turn slowly at the state capital," said Eric Wyles, C-OC board member.

C-OC board member Lori Simmons asked if the new district would lose Salt River Materials Group from its tax base. MUHS business manager Kirk Waddle said that on a per-student basis, about 3 percent would be lost to the district's tax base. But MUHS board president John Tavasci said the state would make up the difference.

Andy Groseta, MUHS board member, asked what impact unification would have on the Valley Academy of Career and Technology Education.

U'Ren said the impact to VACTE would be the number of people on its school board. Marv Lamer, VACTE superintendent, said he has submitted the question to VACTE's legal counsel. He said the state didn't anticipate this situation when it wrote the law allowing vocational districts. He said he believes legislators will support the unification. "There needs to be some session law to address that," he said.

James Ledbetter, MUHS board member, said he doesn't think the school boards should make the decision about unification by resolution. He said that should always be a community decision.

Ledbetter said the two districts should continue to look for ways to share services and save money, but unification should be a "general election vote."

MUHS Superintendent Tim Foist said it wouldn't be fair to take money from Mingus to equalize salaries for C-OC. But it would be fair if the state picked up the tab.

C-OC board member Jason Finger said that a year ago the boards and administrations from both districts convinced voters that unification is a bad idea. "It seems a little bit awkward."

Randy Garrison, president of C-OC's board, said the last vote on unification actually showed overall support. "They didn't like the way it was being proposed." He said that people didn't like the idea that the state was mandating the election.

Also, the fact that the state wasn't going to help with any money for unification turned some voters against the idea, according to Garrison. He pointed out that when it is done by the elected board members, local control is retained.

"We really need to kick every rock," Groseta said. He said that given the tough economic reality, board members should look at every possibility. He said he liked the idea of a public forum that Foist has suggested earlier. "Let everybody come," he said.

Tavasci pointed out that all of the neighboring school districts are "unified" districts. "It's working all around us," he said. "It makes good business sense."

"For us to go forward, we need board action," said Foist. He said both boards meet next week, C-OC on Tuesday and MUHS on Thursday, and they can put this on their agendas to decide whether to stop this or start it.

"We can still save money just by working together as we are," Foist said.

Both boards did give direction to Foist and U'Ren to place the item on next week's meeting agendas.