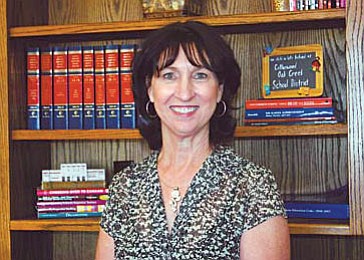 COTTONWOOD -- The Cottonwood-Oak Creek School District Governing Board unanimously approved a resolution Tuesday night to study unification and also to participate in a public forum.

The district has been considering unifying into a single district with Mingus Union High School. The MUHS board will take up a similar resolution Thursday night. MUHS Superintendent Tim Foist and Business Manger Kirk Waddle attended the C-OC meeting.

Board member Lori Simmons asked if administrators from both districts are comfortable with June as a target for the unification.

"Anything would be doable and possible," said C-OC Superintendent Barbara U'Ren. But she pointed out that the two boards are counting on the state legislature for financial help with the transition. She said that County Superintendent Tim Carter had reported to her that it may be June or late in May before that issue would be considered in the current legislative session.

Board President Randall Garrison said that C-OC must give notice to the taxpayers in early February. An information pamphlet must go to taxpayers 90 days before the board votes on a unification resolution. "We have until that vote to back out," he said. He said it is still an option to postpone the unification resolution until next year. That would make July 2011 the target date for unification.

Garrison asked how the districts stand with their tax rates if unification occurs.

"That's very interesting," Waddle said. "The combined tax rate will drop about one half of a point." He said that is due to a state equalization formula. "The key is we will receive more equalization."

Board member Janice Rollins said there is no guarantee that the state will come through with any financial assistance. She said she worries about the elementary students losing out to high school students after unification. She said too much money is spent on sports at the high school.

"The community told us last year they don't want this," Rollins said. "I'd like to study it a little longer."

Board member Jason Finger said that when voters said no to unification last year, the two districts did not have the incentive of money from the state to help with salary equalization.

"I think we've studied it to death," Finger said.

Board member Eric Wyles said that C-OC is the only multi-campus k-8 district in Yavapai County that is not unified to a high school. "I don't want to discuss this for another year," he said.

In the end, the board voted to pursue unification but not to make a final commitment until it is clear what the state can and will do to help with transition funds.