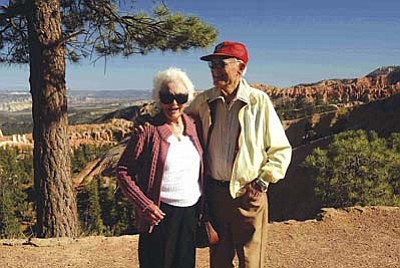 Don J. McDonald celebrated his 92nd birthday Jan. 6, 2010 at his home in Cottonwood with his wife Anna, his son Bob and wife Ann, son Don and wife Sherry and daughter Susan with her guest Rick. Don McDonald was the second mayor that the town of Cottonwood had – mayor from May 24, 1965, to May 22, 1967, as well as the first ever vice mayor -- ahead of being mayor when the town was originally incorporated in the 1960s. He was also the manager of Verde Valley Lumber Company in Cottonwood for approximately 30 years (most recently Foxworth-Galbraith Lumber Company) until he retired in 1979. He and Anna have both lived in Cottonwood since 1934 and both graduated from Clarkdale High School in 1936. He was born in Camp Verde in 1918 and spent part of his early childhood there and partly in Southern California before permanently moving to Cottonwood in 1934.