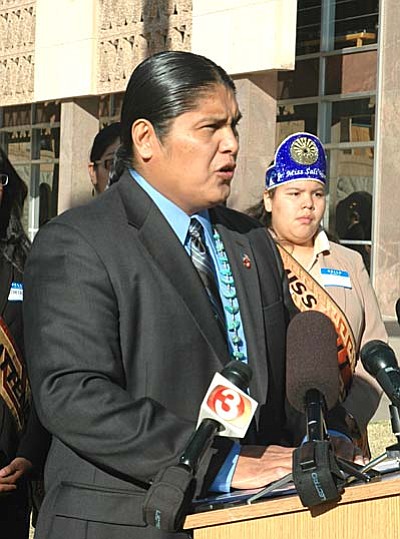 Rep. Chris Deschene, D-Window Rock, announces his bid Tuesday to become secretary of state. Descene said while he has been in the Legislature just one year he is qualified to become governor if the need arises, given this state's history of governors quitting or being ousted. (Capitol Media Services photo by Howard Fischer)

PHOENIX -- A one term legislator said Tuesday he has the experience to be the secretary of state -- and governor if need be.

Chris Deschene, D-Window Rock, said Arizona needs someone who will ensure the integrity of the voting process. The secretary of state is the state's chief elections officer.

Deschene said he got a first-hand look at what can go wrong in the 2008 election when some county recorders refused to count the signatures on nominating papers of some candidates because the signers were reservation residents and used a post office box for their address. The Arizona Supreme Court eventually ordered that the signatures be allowed.

Deschene acknowledged Arizona's history of having secretaries of state that have become governor, most recently just a year ago when Janet Napolitano quit to take a job in the Obama administration. That elevated Jan Brewer to the top spot.

He said, though, his lack of experience in state government does not mean he would not be a good governor if that transition happened again.

"I think what this state needs are bold leaders willing to make tough decisions, willing to stand up, who have a proven record to take our state in the right direction,' he continued. And Deschene said all the experience of those who have been in government much longer "hasn't gotten us any further in solving this crisis.'

He touted his own background, including graduating from the U.S. Naval Academy, 10 years as a marine and degrees from Arizona State University in both law and a masters in mechanical engineering.

The only other Democrat in the race at the moment is Sam Wercinski who served two years in the Napolitano administration as state real estate commissioner. Wercinski is a graduate of the Air Force Academy and has a master's degree from the Thunderbird School of Global Management.

Incumbent Republican Ken Band, appointed to his spot last year by Brewer when she became governor, is seeking a four-year term of his own. Band served in the Senate for eight years, four of them as president. Prior to that he was a member of the state Board of Education, including two years as president.