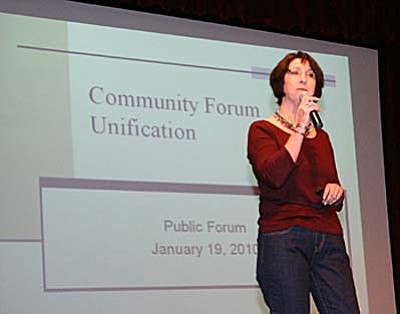 COTTONWOOD - Board members and administrators from Mingus Union and Cottonwood-Oak Creek districts were talking about unification Tuesday night, mostly to themselves.

The public forum, held in the auditorium at Mingus Union, drew a sparse audience. Most of those attending were educators or staff from the two districts.

MUHS Superintendent Tim Foist spoke first. He said that both school boards had directed him and C-OC Superintendent Barbara U'Ren to look into shared services as a means of saving money. Foist said the more they looked at shared services the more it was apparent that unification would provide the most opportunities for savings.

U'Ren gave a Power Point presentation of the facts about unification. "Governing boards can unify without voter approval," U'Ren pointed out. Under Arizona Revised Statute 15-448, two actions are required for unification to occur. First, both boards must vote to approve a resolution to unify. Second, the county school superintendent certifies the resolution.

How to pay for salary equalization between the districts is one of the major issues the boards must solve. U'Ren said there may be legislative support. She and Foist met with legislators and asked for fiscal support. "These funds would be applied directly to teachers' salaries," U'Ren said.

The Power Point presentation stated that the new district would "strive toward a balance of salaries over two to five years." It also stated that "current salaries may never be fully equalized."

MUHS currently spends $631,309 on administration, and C-OC spends $661,704. Dollars that could be saved through unification and redirected to classrooms is projected at $594,294.

The total projected savings, including support staff, grounds, bus drivers and mechanics, is $660,220.

Jim Ledbetter, MUHS board member, said he doesn't believe the projected savings are accurate. He said you never end up trading out person for person.

"I don't believe those savings will ever reach the classroom," Ledbetter said.

MUHS business manager Kirk Waddle said the effect of unification on the taxpayers' primary tax rate in the two districts would be a reduction of about 12 percent.