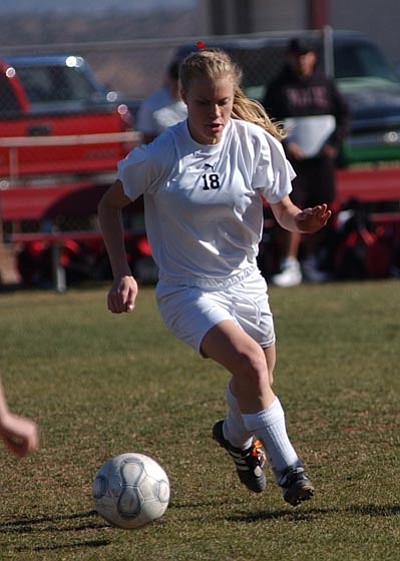 The Mingus Union girls soccer team defeated Flagstaff on Saturday, 1-0. This was the second time the Marauders had bested the Eagles in a week. The first time was in the regional tournament at Mingus. This time it was in Flagstaff.

With home-field advantage, the Eagles put up quite a fight, but the Marauders fended off the offensive challenge the Eagles brought. Mingus scored the only goal of the game at about 24-minutes into the first half. That goal came off of the foot of Torey Braly with an assist by Kelsey Huber.

The Marauders had 13 shots on goal to Flagstaff's five. Goalie Tessa Fanning had four saves, two of them were crucial and kept Mingus one-step ahead of an ever-pressuring Eagles offense.

Next up on the schedule for Mingus is an away game against Mohave on Saturday at 1 p.m. The game that was scheduled against Sinagua on Wednesday has been rescheduled for Monday at 5 p.m. at Mingus Union High School.

The Mingus Union boys soccer team defeated Flagstaff on Saturday at home, 4-2. Gabriel Meza knocked in the only goal of the first half, to put Mingus up 1-0 after 40-minutes of play. In the second half, Williams Dominguez scored Mingus' 2nd goal. Then Mario Ibarra kicked the ball toward the middle and met Mikie Rebstein in front of the goal. Both Rebstein and the Flagstaff keeper went up for the ball and fell to the ground without it going in. Rebstein was the first to his feet and nudged the ball in for the goal. This put Mingus up, 3-0.

Next up on the schedule for Mingus is a home game against Mohave on Saturday at 3 p.m. Then the game against Sinagua that was supposed to be played on Wednesday, has been rescheduled for Monday at Mingus Union High School at 3 p.m.