Earth Park must take down Mago statue (with video) 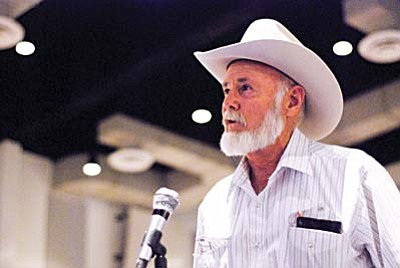 COTTONWOOD -- An attorney for the Tao Fellowship attempted to craft a compromise Monday night. That option may play out, but first the towering Mago Statue must come down. The city will extend a conditional use permit for six months, but if the Fellowship does not bring back a master plan for their ultimate uses during that time, the permit will be terminated.

Bill Ring, a Flagstaff land use attorney, smoothly presented a case for the Mago Earth Park to show that the organization was willing to work with the city. He admitted that the tall Mother Earth statue has become, "a lighting rod for contention. We understand that."

In the end, however, the Cottonwood Planning and Zoning Commission voted unanimously that the statue must be removed within 30 days. The hearing was conducted before a crowd of 500 to 600 people in the Mingus Union High School auditorium.

Security was important to the city. Five officers from the Cottonwood Police Department were supported by another five Yavapai County deputies. Board Chairman Ed Kiyler was firm, "I will be running the meeting." When people spoke out of turn or clapped too long, Kiyler rapped his gavel for quiet.

Ring said the original 39-foot statue with a 9-foot, 10-inch base was proportional from an aesthetic standpoint. Still, the compromise he proposed was to retire the large Mago statue and replace it with one that would stand 9-feet tall on a 9-foot pedestal. He said the total height of the new statue would rise to only 18 feet, fitting within Cottonwood's building height limit in most zones of 35-foot.

Still the attorney compared the existing statue height with the neighboring Immaculate Conception Catholic Church. A reading of the city ordinance, according to Ring, showed that religious institutions are exempt from the height standard.

When two hours of public comment was completed, some of the commissioners questioned the apparent conflicts. They questioned how the proportion was appropriate in the larger statue, but not in the smaller proposal. They also questioned the matter about religious exemptions, when the Fellowship has indicated its ultimate plan might include a hotel, restaurant and gift shop.

In the end, the commission unanimously approved a recommendation of the planning director to remove the 50-foot Mago statue within 30-days. Any new statue would have to be presented to and considered by the Planning Commission as a separate matter. It would not be an automatic replacement for the larger statue by Monday's actions.

The commission did grant an extension of time for the Conditional Use Permit for six months. During that time, the Tao Fellowship must produce a development master plan or face termination of the use permit. Ring had proposed that the Tao Fellowship be given one year to produce the plan, not six months.

Board Chairman Ed Kiyler says the city has been asking the group for three years to put together a master plan, "Now you want another year?" he asked.

The other statues must be moved behind the property line setback and be given proper landscape screening along Bill Gray Road. Community Development Director George Gehlert said he would not be so concerned about the reflective gold paint on those statues if the park is properly screened. Reflective paint is discouraged by the city.

A spokeswoman for the Tao Fellowship, Jennifer Sing, stated briefly, "It was very gracious for the commissioners to spend this much time. We will continue to go forward to seek the best way we can to work together that will serve both us and the community."

Asked whether the Fellowship will appeal the proposal to the City Council, Sing said, "We are not sure."

The commission probably heard 100 comments from the public, alternating between those against the proposal and those in favor of the Earth Park plan.

Many invoked their own religious beliefs in opposing the park, like Andy Ericson: "We have Judeo-Christian values. This is not representative of the majority of the people."

One man called the statue "a graven image."

Some claimed the height was out of place.

Mark Avery and other opponents said the Mago Earth Park must follow the same conditions to which other businesses must adhere. "This is a for-profit business. If you allow a 50-foot sign to attract business here, then you should allow a hardware store to have a 50-foot hammer."

Steve Harris of Cottonwood described himself as a native: "This does not fit in with the general plan."

Judy Love said, "Only the P&Z would be gullible enough to allow them free advertising to bring people into the compound. How much did they pay for this permit? What a slap in the face to the church across the street."

Linda Chamberlain said we should follow Soloman's wisdom and consider the wishes of registered voters of Cottonwood.

Tammy Ontiveros: "They need to be placed on a short leash."

Russel Cummings said, "I believe in black and white. I don't want no statue."

Supporters said it will be a "community asset and attract tourists to Cottonwood." One who has worked in the park said 150-170 people visited, "half of them are tourists."

Many said the park is intended to assure harmony. Betty Mackie said the Earth Park "represents "harmony; it fits in with the beauty of the nature here."

Compromise, said another, is what Mago is all about.

Micheal McEuen of Mesa said he has known Mr. Lee for years and "there is no more generous person."

Another supporter of the large Mago said that the commission should look at the "bigger picture. It reminds me of the pain and suffering we are inflicting on each other. I have donated money to this project, where people can come together in harmony."

Janelle Moore of Mesa compared Mago's blue eyes with the color of the sky. "I hope for peace, a place to practice my spirituality."