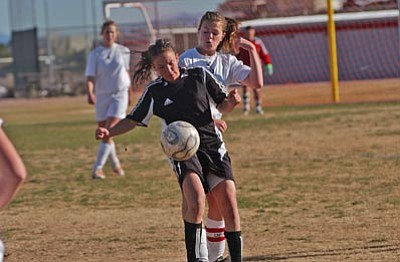 The Mingus Union girls soccer team continues to dominate their opponents with wins over Sinagua and Coconino earlier this week. The Marauders bested Sinagua, 3-0 on Monday and then beat Coconino, 5-0 on Tuesday, in Grand Canyon Region battles at home.

The next day, the Marauders hosted the Panthers. The game was scoreless until the 24th minute of the first half when Torey Braly found the back of the net with the assist from Rivera. Eight minutes later it was Braly again, this time off of a header, with the assist coming from Rivera from a cross.

At halftime the score was, 2-0. The Marauders' offense went right to work, when Duke scored on a breakaway just 1:30 into the second half. Goal No. 4 came off of the foot of Bri Nevitt when she intercepted the ball and knocked it right over the goalies hands into the back of the goal.

The fifth and final Mingus goal was knocked in by Duke, who stole the ball from a Panther throw in and beat two defenders and the goalie to knock the ball into the net.

Goalie Tessa Fanning had six saves during that game, but the Mingus defense did a great job of preventing the Panthers from pressuring Mingus' goal.

The Marauders, which are currently ranked No 2 in the Power Points, have done a great job of dominating opponents, despite battling injuries this year. In the Coconino game, Mingus had starters Mackenzie Mabery and Jessie Zaske back on the field. This allowed coach Buddy Rhodes to move Alina Mouritsen back to midfield. With the starters back in the lineup, Mingus got a more dominating win over Coconino than the last time they played each other.

"I feel very fortunate that we've been able to get the wins while being down starters," said coach Rhodes.

The Marauders play Mohave today and Page on Saturday. Mingus only needs to win one of those two game to be crowned Region Champs. With the region tournament win a couple of weeks ago, they already have a spot in the State Tournament.