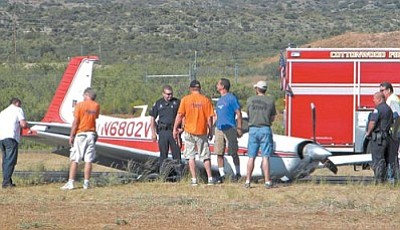 An airplane landed on its belly when its landing gear gave out at the Cottonwood Airport.

COTTONWOOD - Something of a hard landing for a Chandler pilot landing at the Cottonwood airport Friday morning. Fortunately, he walked away unscathed. The pilot was the only passenger in the plane as it was landing after 8 a.m.

The pilot told investigators that he had been on the ground for about 50 feet when the landing gear suddenly collapsed and the plane skidded to a stop on its belly.

The plane is a 1971 single-engine Mooney 4-passenger aircraft. The pilot said he has 170 flight hours under his belt and was on a business trip.