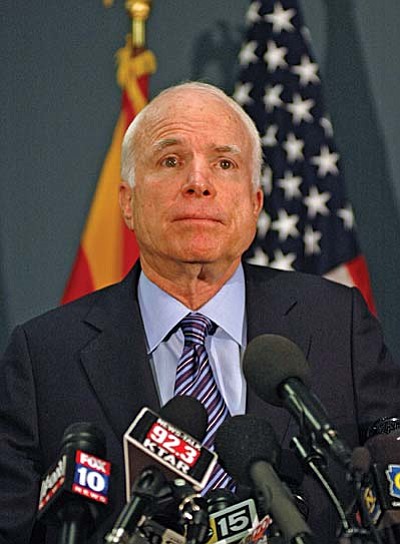 A new statewide Behavior Research Center poll released Wednesday finds McCain favored by 64 percent of the Republicans and independents who intend to vote in the GOP primary. That is up 10 points from a survey the same organization did two months earlier.

Hayworth, by contrast, picks up just 19 percent of the vote of the same group, down from 28 percent in April. And Navy veteran Jim Deakin, whose name was not included in the April survey, shows up now at 5 percent.

Sanders would not divulge what Hayworth's own internal polls show. But he said automated telephone surveys done by Rasmussen Reports are "more accurate.'

Those, however, still have Hayworth trailing the incumbent, with the most recent survey putting McCain 11 points ahead. Sanders said there's a good reason for that.

"John McCain has run a $6 million campaign,' he said. "About $3 million of that has been on negative advertising about Hayworth.'

Most recently, McCain has concentrated on Hayworth's role in 2007, after he left the U.S. House of Representatives, as television pitchman in a "free money' infomercial. Hayworth has called the move "a mistake,' saying he did not properly research the company.

McCain also has hammered away at the fact that Hayworth became a lobbyist.

Hayworth, meanwhile, has been using his own resources more sparingly.

"We'll be on TV, telling our side of the story, talking about John McCain's failed record, talking about the things J.D. wants to do for this state,' Sanders said.

But Hayworth is unlikely to be able to match McCain's resources. His last report showed him with about $1 million; Sanders refused Wednesday to say how much Hayworth has collected to date.

The poll comes as Hayworth and McCain are slated to face off for their only two debates of the race, one Friday in Phoenix and the other the following day in Tucson.

Time could be running short for Hayworth to make a serious dent in McCain's lead: While the primary is not until Aug. 24, early voting actually starts July 29. And the trend in Arizona has been for many people to cast their ballots early.

How much influence that will have is unclear: The same Behavior Research Center survey taken before Mills quit showed him with just 12 percent of the vote, against 57 percent for Brewer.

The survey of 190 Republicans and 46 independents who said they intend to vote in the GOP primary, taken between June 30 and July 11, has a margin of error of 6.5 percent.