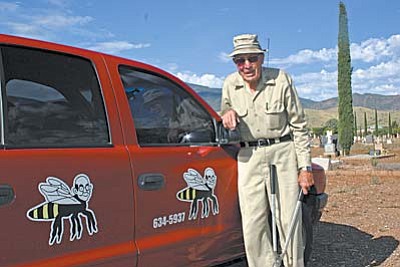 Locy Rogers is a well-known beekeeper and bee removal service in the Verde Valley.

CLARKDALE - Well-known Clarkdale beekeeper Locy Rogers, 81, has taken it upon himself to thoroughly clean and de-weed Valley View Cemetery. He's not waiting for the cooler mornings of autumn.

"This is all volunteer," Locy said. He explained that some people have offered to buy gas and help with other expenses and tasks. But he says, no thank you. He likes volunteering.

He spends about three hours in the morning two days each week cutting and trimming and piling weeds and other growth. The city then picks up his piles and carries them off.

"I finished half of the cemetery in two days," he said. "This trimming is the slowest part."

He has been cleaning the cemetery since the first of October. He doesn't mind the work as long as he decides when he works. "It's by my schedule," he said. "If I want to do something else, I do something else."

While working in the cemetery, Locy often stops at his wife's grave to talk to her. Evelyn died two years ago after being on dialysis for about six years.

"She finally said 'No more dialysis,'" Locy said. "She lasted about two weeks."

He and Evelyn were married June 22, 1959, and the couple moved to the Verde Valley soon after, in February.

Around 35 to 40 years ago, Locy got into beekeeping and beehive removal. "My oldest son has asthma real bad, and they said honey would be good for him," Locy said. That's how he got into the business. Whenever he removes a troublesome hive for someone, the bees are taken home or he sells or gives them away.

Locy has an acre lot in Lower Clarkdale, and he keeps a vegetable garden about 14-feet by 100 feet. He said he's tended that garden for 25 or 30 years.

With volunteering at the cemetery, tending his bees and garden, Locy doesn't really have much time to do other things. He has no interest in pastimes such as golf.

"My first date with my wife was at Goofy Golf in Phoenix," Locy said. "I decided I didn't like golf."

Locy lived in Mesa and worked as a school bus driver and school custodian in Gilbert for four years. He then moved to the Verde Valley and worked in the same jobs for Mingus Union High School.

He worked for Babbitts Lumber Yard for more than 26 years before it became Lumbermen's. He stayed with that company for another two to three years.

Locy doesn't really expect to reach a finishing point with his volunteer work in the cemetery. Unfortunately, weeds keep on growing.

"It probably will keep repeating," he said, "depending on the moisture and such."