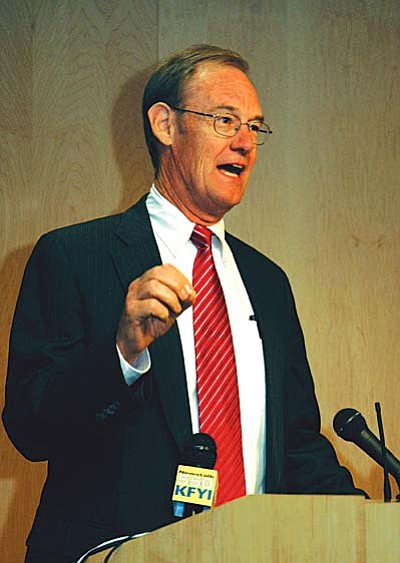 PHOENIX -- Incumbent Jan Brewer has a big lead over Terry Goddard in the race for governor, according to a new statewide poll.

But there are enough people undecided that could make a difference.

The Behavior Research Center finds Brewer the favorite of 45 percent of the 524 registered voters questioned. Brewer has shown a nearly steady increase in her popularity this year, much of that the result of her decision to sign the tough new immigration law and to defend it in court.

Goddard, by contrast, is the choice of just 25 percent, with some third-party candidates dividing another 8 percent.

Much of the task for Goddard, currently the state attorney general, now is to work on the 22 percent of Arizonans who say that, as of yet, they haven't figured out who should be governor for the coming four years.

Pollster Earl de Berge pointed out that Goddard, while he has been on the campaign trail, has yet to launch any sort of media campaign. He also has not gotten the same exposure as the incumbent because there is no Democratic primary.

Goddard agreed with that assessment.

"I have not yet begun to fight,' he quipped, quoting the famous line of John Paul Jones, a Revolutionary War hero and considered by some the founder of the U.S. Navy.

But de Berge said Goddard clearly has some work to do.

Goddard acknowledged the incumbent's newfound popularity because of her high-profile role in the fight against illegal immigration. But he said that can't last.

"I still think the most important issue is the budget and the economy,' Goddard said. "And I'm going to continue to talk about that.'

Anyway, he said, all Brewer did was pen her name to the legislation "she had very little to do with developing.'

Since that time, though, Brewer has claimed the role of being the defender of the right of states to protect its residents against illegal immigration. That includes taking the sole role of mounting the defense of the law through attorneys she hired.

Goddard, however, said he doubts she can live off that publicity forever.

"She's not in the courtroom,' he said.

The poll points up Goddard's strong and weak points.

Goddard is running pretty much neck-in-neck with Brewer among women. But de Berge said Goddard "trails very badly' among men, only 20 percent of whom said they would vote for him.

Goddard also has a strong lead among Latinos who comprise about 30 percent of the population. But de Berge noted the Hispanic community has repeatedly been unable to translate that voting strength into electing favored candidates, at least in part because they are less likely to actually turn out and vote.

Of potential concern to Goddard could be that Brewer actually has a bigger lead over him in Pima County than the statewide average. That is not only where Goddard was born but is considered to be a more liberal community where Democrats generally have a better chance of getting elected.

Goddard said he's not buying those numbers, saying the results are "not as accurate ... as they should be.'

The survey, conducted between June 30 and July 11, has a margin of error of 4.4 percentage points.