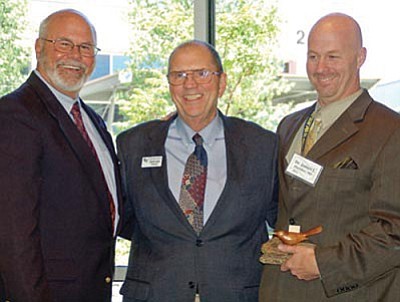 During the past three years, VVMC has donated more than $600,000 to underwrite four YC nursing faculty members, and it has provided full-time coordination on its medical center staff for all YC nursing student clinical training needs.

"We simply could not provide this critical program in the Verde Valley without their leadership support," Horton said.

According to Horton, support from an Arizona Department of Commerce grant has allowed the college to triple enrollment in the nursing program in less than 10 years.

"Part of this growth included expanding the program to the Verde Valley, Cottonwood-Clarkdale campus. This expansion required major facility renovations, which we completed and are very proud of. Also, for this program to be successful, we needed a strong partnership commitment from VVMC and its affiliate, Northern Arizona Healthcare in Flagstaff. I am proud and grateful to say that we have received just that from VVMC," Horton said.

Bleicher is board-certified in internal medicine and holds a master of science degree in health care management from Harvard University in Boston, Mass. He has worked both clinically and in numerous healthcare leadership roles for more than 15 years.

Bleicher joined VVMC in 2007 to serve as vice president of medical affairs and he became president in 2009.

An employee of the Arizona and Yavapai County Community foundations since March 1998, Edwards led a team in increasing the charitable assets of YCCF by more than $18 million, with millions more still to mature in legacy gifts. She has also worked to ensure that local volunteers were able to stand in the spotlight as the "face" of YCCF.

According to ACF Vice President of Affiliates Carla Roberts, "The community foundation will always demonstrate the impact of Kristi Edwards. One of our top planned giving experts, Kristi's accomplishments will be seen for many years to come in the gifts she nurtured and charitable commitments she put in place. She is a true original and will be truly missed."

Following Edwards' retirement, Traci Corey, who has served as YCCF grants and operations coordinator for the past three years, will step into a new role as manager of ACF's North-Central region.