Boomer kids tell us about an 'average day' 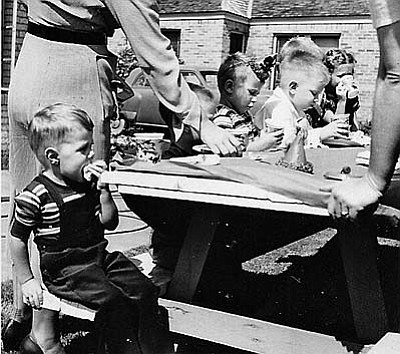 “We roamed the neighborhood at will,” laughed D.L. “That was a significant area, typically limited only by four-lane roads. Alleys, culverts, trails, and creeks were all part of this urban territory.

“Our parents knew where we were, and were aware of the usual suspects with us. Bikes – BMX motocross style – were the transportation of choice.

“What did we fear? Dogs, tree limbs breaking, skinned knees, and bike wrecks.”

“I remember days in the car,” said J.L. “Very relaxed. No car seats. No seat belts.

“Normally, I would stand in the middle of the front seat…no console either. I stood there until I was too tall and had to bend over to see out the front window.

“One time my Mom and I were taking my grandmother out to my aunt’s farm when I spotted what looked like this huge mushroom cloud. Remember those Cold War days?

“It turned out to be an explosion from a fireworks stand just outside of town.

“Also, my Dad would often let me ‘drive’ on the country roads. I would sit on his lap and steer, and we’d sing ‘The Eyes of Texas’ really loud. I thought that was the state song until I was in high school.”

“Almost every day,” J.J. remembered, “I’d walk home from school carrying a heavy load of books. We’d stop and get a Coke float at the shopping center’s drug store, or we’d get a hamburger at a family-owned restaurant also in the center.”

“During the school year my brothers and I got up, made our beds, ate breakfast, and walked to school with friends. I love reading, spelling, and social studies,” R.R. recollected.

“We usually stopped on the way home at a little convenience store that had cold drinks that were iced down in a big red Coca-Cola container in front of the store. We bought candy lipstick and candy cigarettes, and walked the rest of the way home.

“We watched cartoons or American Bandstand on alternating nights. I helped Mom either set the table, cook dinner, or clean off the table to do dishes.”

“In elementary school I remember how delicious that cafeteria food was because it was real home cooking done on-site,” recalled G.M. “The only food I didn’t like was hash. But we had home fried chicken and catfish, as well as good barbeque and fresh vegetables."

One older Boomer said he remembers that lunch at his elementary school “cost 37 cents. That included one meat, two vegetables, a fluffy roll, and a choice of milk or a flavored orange drink.”

“Also, we paid a dime on a few Fridays and got to experience some culture. Entertainers on the Southern School Assembly circuit presented magic shows, singing, playing instruments, and telling stories. One of them was a professional whistler who did the whistling for the old radio show ‘The Whistler.’”

“We had neighborhood pick-up ball games most afternoons,” recalled L.R. “Although they may have existed in previous generations, we had more leisure time. Now, all children’s sports are organized.”

“The red-haired lady who lived at the end of our block was single,” another Boomer remembered, “and the first person to build a fence around her back yard. She sun-bathed, and got caught drinking beer once. There weren’t any kids around at the time, but once was enough to give her a ‘wild woman’ reputation.

“She would pull her TV out to the front door and set up lawn chairs in her front yard. All the neighborhood kids would sit out there, and we’d watch Your Show of Shows, Lawrence Welk, Mitch Miller, The Gary Moore Show, Jack Benny, Burns & Allen, and others.

“All shows were that lady’s choice, of course, but we all thought she was really cool.”

Remembered T.C.: “Many kids gathered at a house up the street – I don’t think I ever knew anyone in the family – where there was a trampoline in the driveway…on the concrete, no net! The general feeling was apparently of safety and neighborliness, not fearfulness.”

Most Boomers remember some wild Halloween stories. But here’s one with a slightly different twist:

“I remember when Halloween died,” said A.T. “I was in the 7th grade in 1975, and had dressed up as Quasimodo to go trick-or-treating with my best friend in her neighborhood directly west of a golf course.

“This was during the time of the urban legend of razor blades and hypodermic needles in candy. When we got back to her house to review our haul, we each found several pieces of bubble gum pre-chewed by some thoughtful goblin and then painstakingly rewrapped.

“That was the last time I went trick-or-treating,”

“In the summer,” said R.H., “my friends and I would play a lot of football or baseball. And we loved to play cowboys, or ‘Combat.’”

“We were out of the house right after breakfast, while it was still cool,” a lady Boomer remembered. “We terrorized the neighborhood on our bikes that were all souped up with baseball cards attached to the spokes of the wheels with clothespins. My bike was blue with fancy handlebars that had plastic fringe coming out of the handgrips!

“We climbed trees and skated the sidewalks with clip-on skates, and no summer was complete without thoroughly skinned knees and elbows. Mom gave me pocket change to walk up to a nearby food store to buy milk, bread, or cold drinks. I always had my little brothers in tow, and we held hands and flew across the busy street when it was safe to cross.”

A couple of Boomers also remembered summer vacation car trips. “Every day we’d wake up really early, and drive as far as we could before dark,” one said. “We kids had only one request: stop at a motel where there’s a swimming pool.”

“After-school lessons,” emphasized K.L. “Everyone I knew was signed up for lessons…piano, art, dance, etiquette. I don’t think our parents were subjected to endless lessons.”

“Somewhere around 6th grade,” a male Boomer recalled, “some kid – or a kid’s mom – got information on ballroom dance lessons being offered by two or three different studios. Suddenly this became a trendy thing. Every person wanted to take lessons at the same studio as his friends.

“This went on for two years. All I remember is that dancing conflicted with baseball.”

“I grew up in a neighborhood that was located above the city zoo and surrounding park area,” P.M. said. “In the summer the whole neighborhood of kids got on bicycles and rode to the zoo, unsupervised. We took our sack lunches, bought a drink, looked at the animals, and then played baseball on the diamonds in the park.

“We weren’t afraid of being out by ourselves, and we had the best summers ever.”

Said D.W.: “I walked home from school after basketball practice --about two miles -- unaccompanied. I walked into my parents’ front door, which was unlocked. We kids stayed outside late into the night, parents didn’t worry about what might befall us, or what we might get into.”

“I loved my bicycle,” C. T. said. “The bike itself wasn’t anything special, probably a hand-me-down from my sister, but it represented total freedom. I could roam the neighborhood all summer long, as long as I was back by dinner, escaping again afterwards only to return by dark.

“My friends and I would meet on the playground of an elementary school around the corner of my house, or I’d ride up to the shopping center to blow my miniscule allowance on candy at the drug store.”

“I could ride the bike to school, and travel blocks from home without fear,” J.H. said.

“One day I fell off my bike while running an errand for Mother,” L.H. remarked. “When I got home, with bright green grass stains on my brand new white shirt, Mom already knew I’d had a wreck because someone in the neighborhood notified her immediately.

“What I think is unique about that is: she was thankful the woman let her know. Today’s mom would probably consider that ‘none of the woman’s business,’ and that if her son fell off the bike at high speed he had some special purpose in doing so.”

“There was no concern about dangerous strangers,” D.S. agreed. “Dad went to work, and Mom sent us outside to play all day with little supervision. I rode my bike around the neighborhood both day and evening. Neither I nor my parents were concerned about my safety.”

“I’ll always remember the day I received my unrestricted driver’s license,” noted F.T. “As I recall, that was age 16.

“Boomers have a love affair with cars, and the automotive age truly underwent a ‘power shift’ with people born from 1946-1964.”

“I grew up in the region called ‘Tornado Alley,’” one older Boomer noted. “This meant we practiced tornado drills – leaving the school room and going into the hall – all the time.

“And, since this was the Cold War period, we also practiced ‘air raid drills.’ They were like tornado drills, but more complicated.

“Anyway, some friends and I remember air raid drills where our moms were instructed to come to the school, and line up their cars. When the emergency bell rang, we were supposed to file out of the school, and hop into cars. The first five kids got in the first car, the next five in the second, and so on.

“In an actually emergency, I guess the cars were supposed to take us somewhere.”

“What was unrealistic about that,” J.D. added, “was that you were supposed to get in the first car available, whether it was your mom’s or not. My mother would have raised Cain until she found me, then she’d load everybody else in.”

“I remember a Civil Defense shelter sign on our building,” she added, “but I never knew what it meant or that it actually led anywhere.”

It’s a thousand wonders,” comments R.R. “that our generation isn’t any more messed up than we are. Our constant, conflicting partners in life were going out to play with our buddies without a care in the world, and the threat of imminent annihilation!”

“In elementary school I remember how delicious that cafeteria food was because it was real home cooking done on-site. The only food I didn’t like was hash. But we had home fried chicken and catfish, as well as good barbecue and fresh vegetables."
Report a Typo Contact
Sign up for our e-News Alerts
Most Read
7 days
30 days

Rags, wheels, and other teen trends
Best years of TV for you and me
Favorite games and toys for girls and boys
Most memorable day of a Boomer's life?
2011: What did we learn?
Event Calendar