Favorite games and toys for girls and boys 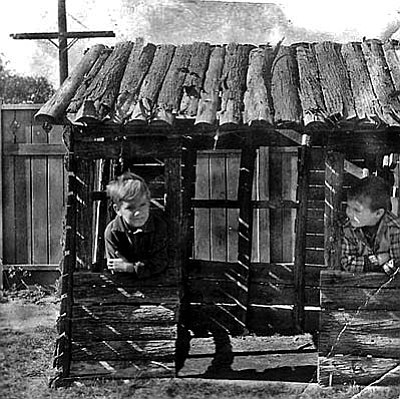 Playing “Fort” was a big thing in the 1950s. Here is Paul Flocken (left) and his long-time best friend Rob Moore playing in the fort made by a family friend for Paul's sister Sandi. It was made entirely out of large tree limbs, bark included. "This is when life was so good, and young people had their imagination to keep them busy," Sandi says.<br /><br /><!-- 1upcrlf2 -->Submitted by Sandi Ashton of Camp Verde.

My wife and I come home each evening to a house fully-plugged into the 21st century. We sit at computers and play online games, turn on the TV to compete in interactive virtual sports, or slip in a DVD to watch the latest movie.

Our daughter, a recent college grad, keeps us up-to-date on emerging technology. And we’ve got lots of young relatives who provide us instant answers to our middle-aged questions.

That’s a far cry from our games of the mid-20th century. But many of them are still around, a tribute to the forward thinking of those creative inventors.

It’s “flashback” time now. We asked our focus group members what they did with their free time, and here’s what they told us.

Baseball – Popular as a sandlot game, as a parent-supported organized activity, and as a television sport. A few vividly recalled the Saturday “Game of the Week” with Dizzy Dean and Pee Wee Reese. Two recalled a favorite baseball glove.

Baseball cards – Many Boomer boys remember collecting these cards – with the player’s face on one side and the prior years’ statistics on the other – for several years. Opening a package of baseball cards to find a superstar player inside was the pre-teen equivalent to winning the lottery.

Bicycle – Probably the most frequently-named possession. Some specifically mentioned owning a Schwinn bicycle. One Boomer talked about the bicycle motocross popularity of the 1970’s. (Boomers’ purchases of multi-speed bicycles from the late 1960’s through the 1970’s triggered a worldwide “bike boom.”)

Cap pistols – Great for chasing friends or firing at make-believe bandits. “I had Roy Rogers pearl-handled cap pistols,” one Boomer proudly told us.

Climbing trees – Is this a sport, a game, or what? Whatever, it’s stored forever in Boomer’s memories. One person mentioned a “neighborhood tree,” where each child occupied a specific limb or branch.

Clue – The classic board game.

Davy Crockett/Daniel Boone – Many products like raccoon skin caps, toy hunting rifles, and fringed shirts and pants were purchased by fans who wanted to be like these pioneer heroes.

There’s another version where teams compete, and the last person left unhit by the ball wins for his/her team.

Football – One of Boomer boys’ favorite games, as were its equipment like helmets and pads. Several recalled informal pass-and-catch games, or two vs. two games.

Monopoly – The board game named most often as the favorite in our survey.

Plastic soldiers – A huge favorite among Boomers. They could be purchased in toy or five-and-dime stores. Most were about 2”-3” long, in a variety of action poses.

Train set, electric – “I still have my Lionel set,” one Boomer told us.

Barbie – One of the most popular dolls – and toys – of all time. “I was a pretty typical little girl,” A.T. reported. “I loved Barbie and had tons of her pink paraphernalia, like the Barbie Dream House and her three-wheel ATV, not to mention all the clothes and accessories. Whenever I’d lose one of Barbie’s little high heel shoes, my poor Dad always found it in the shag carpeting when it imbedded itself in his heel.”

Chemistry set – “My cousin had one,” J.D. remembered, “which we successfully blew up.”

Dolls – In addition to Barbie, there are too many names and types to list. But if you were a Boomer, you probably know them. “Saucy Walker, Betsy Wetsy, Madame Alexander, Tiny Tears, Ginny…those were my dolls,” one Boomer reported.

Fall – Actually, this was a fashion, not a game. “This was a hairpiece that I tucked under my short, fine fringe of hair,” said E.F. “Never before or since have I been able to toss my hair and wear headbands. I have lots of pictures with that hairpiece I thought looked so good.”

Four Square – Four players stand in four separate interconnecting squares, and score points by how they bounce a ball in their opponents’ square.

Horseback riding – Even in large urban areas, one could often find stables where customers could “rent” a gentle riding horse for an hour or two.

Hula Hoops – These incredible large hoops are a perennial favorite with both genders.

Jacks – A favorite game of elementary and middle school girls. It generally required at least six jacks and either a golf ball or small rubber ball. “Now about the jacks,” explained J.H. “You were a true ‘L7’ (that would be a square) if you played with six jacks. The term would be 'dork' today. Ten jacks was a minimum! At the end of the first round -- onsies, twosies etc.-- we would take turns calling out the next game…double bouncies, pigs in the barn, around the world and so on.”

Jump rope, Double Dutch – This quote comes directly from Wikipedia: “Double Dutch is a sport in which one person jumps rope with two ropes, and one or more people jumping simultaneously. Playing Double Dutch involves at least three people total: one or more jumping and two turning the ropes. A person jumping usually does tricks that may involve gymnastics or breakdancing; it can also have fancy foot movements incorporated. Young people, including many boys, do this for fitness, and it is competed at world level. Competitions in double-dutch were often seen at block parties.”

Kick the Can – This is a little bit like hide-and-seek.

Nancy Drew books – This book series was – and remains – popular among young ladies. “I established my own Nancy Drew Detective Agency when I was in third grade,” one lady told us.

Record player – Those of us over 40 often find it hard to describe either large stereo systems or portable record players to our children. Even harder to describe are the different turntable cycles required to play 33-1/3, 45, and 78 rpm records.

Red Rover – This game requires two teams. Each team holds hands. The first team chooses an opposing team’s player to attempt to break through their line by saying “Red Rover, Red Rover, let (person’s name) come over.” If that person breaks through the line, he then becomes part of that team. The other team then picks a player. (I’m not sure how this game ends.)

Steal the Bacon – In this game there are two teams and an umpire. Each team member is assigned a number. An object (“the bacon”) is placed in between them. The umpire calls out a number, and team members with that number attempt to be the first to grab the bacon and return it to their side without being touched (tagged) by a member of the other team.

Swimming – Most kids loved summers spent either paddling about in the water, or playing various swimming pool games.

Track – “When I got to fourth grade,” recalled P.M., “the only man teacher in the school started a track team. Girls and boys ran relay races against other schools, and it was the best time.”

Twister – Many of us loved this game played on a large plastic floor covering which displayed various colored circles. Each player received instructions from a spinner on where to place each of his/her feet and hands.

Wahoo – Again, this direct quote comes from Wikipedia: “Wahoo, a game similar to Parchisi, is a board game that involves moving a set number of marbles around the board, trying to get them into the safety zone. Most boards are four to six players. Wahoo has been a popular game for decades.”

1. Several participants expressed regret that citizens don’t spend leisure hours outside any more. One speculated that this insular lifestyle has contributed to neighborhood decline.

2. Many Boomer games required several participants and constant interaction and mediation, a skill much needed today.

3. Disturbing news reports make today’s responsible parents wary of outside dangers, and inhibit the free lifestyle most of us reportedly experienced.

4. Many boys’ toys were weapons: toy cowboys, soldiers, guns, and knives. Some attribute this to the number of western and war series telecast in the 1950’s and 1960’s.

5. A number of television programs dramatized alternately the American frontier and the American cowboy, or futuristic space age themes. Were we seeking to move forward too fast, and simultaneously attributing more value to the past?

“I had Roy Rogers pearl-handled cap pistols,” one Boomer proudly told us.
Report a Typo Contact
Sign up for our e-News Alerts
Most Read
7 days
30 days

Best years of TV for you and me
Most memorable day of a Boomer's life?
Rags, wheels, and other teen trends
2011: How to get by in junior high
2011: Movie favorites: Just pop culture, or our generation's true beliefs?
Event Calendar