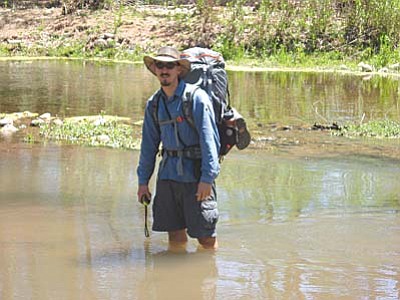 Courtesy Joe Cook/AZGS<br /><br /><!-- 1upcrlf2 -->Lead author of the Arizona Geological Survey report, Joe Cook, and his crew spent countless hours walking and kayaking the entire stretch of the Verde River from Sullivan Dam to the confluence of the Salt River, sifting through rocks and determining where the ‘Holocene alluvium is located.”

CAMP VERDE - Last month the Arizona Geological Survey released a 51-page report, accompanied by 10 maps, that will, eventually, have a significant impact on water use and water users in the Verde Valley.

Entitled "Mapping of Holocene River Alluvium along the Verde River, Central Arizona," the report and its accompanying maps were commissioned by the Arizona Department of Water Resources at the behest of the Arizona Supreme Court.

The court will need the maps if it ever hopes to sort out the 30-plus-year-old case that will ultimately sort out the statewide, complex puzzle of water rights, formally known as "The General Adjudication of All Rights to Use Water in the Gila River System and Source."

The complexity of the water rights puzzle is compounded by several factors, not the least of which is Arizona's overlapping compendium of water laws, all of which are based on the premise of "first in time, first in right." The law gives priority to those parcels of land that have put water to use the longest.

But as complex a problem as it is to sort out who was using how much water and when, there is an even deeper problem, also based in statute.

Arizona law does not recognize that groundwater and surface water are connected. When discussing water rights, the discussion is about surface water.

To use surface water, you must have a water right. To further complicate matters, Arizona law also says that not all surface water flows on the surface. Some of it flows through the ground, beneath and beside a stream.

Groundwater, because it is not connected to surface water in the eyes of Arizona law, does not require a right. It remains free for the taking.

In trying to sort out water rights throughout the state, one of the biggest challenges has been the demarcation between where groundwater ends and surface water begins. The courts have called that line of demarcation, the "bright line."

A not so bright line

The first step toward determining the theoretical bright line was taken several years ago when the courts determined that the underground flow of a stream (groundwater that is in fact surface water) is contained with an area defined as the "floodplain Holocene alluvium."

By definition, it is the collection of unconsolidated sands, gravels, clays, silts, rocks and boulders laid down during the Holocene geological period, through which stream water flows. The Holocene period is the last 10,000 years, give or take a few centuries.

The second step for the court has been to draw that line on a map. The AGS maps show that line as it wanders up alongside the Verde River.

Although the maps clearly demarcate where the geologists from AGS believe the Holocene alluvium begins and ends, from a legal sense the line is not as clear.

"The line makes a presumption as to what is surface water and what is groundwater," says former judge, now Verde Valley claims advocate, Duane Wyles. "If your well is inside the line, you are presumed to be taking surface water.

"If you are outside the line you are presumed to be taking groundwater -- as long as no one contests your claim. However, if someone presents evidence to the contrary in the adjudication court, you will be forced to defend the claim.

"As a practical matter it's a matter of dollars. To hire a hydrologist to do the work he needs to do to make a determination he can take to court is goings to cost thousands of dollars, a lot more than a normal homeowner can afford."

The Arizona Geological Survey has been working on the Verde River maps since late 2008. They are still working on additional maps and an additional report that will cover the river's five major tributaries, Oak Creek, Beaver Creek, West Clear Creek, Fossil Creek and East Verde River.

Those maps will be released in September according to project coordinator Philip Pearthree.

The 10 maps cover the 178-mile length of the river from Sullivan Dam north of Prescott to the Verde's confluence with the Salt River.

"There was some preexisting mapping of the river, particularly in the Verde Valley, which we didn't ignore. But we redid the mapping of the Holocene river alluvium. It's new. It wasn't done in a vacuum," Pearthree says.

Determining what alluvium accumulated in the last 10,000 years and what occurred earlier was a matter of sorting out rocks

"It's not easy to tell in every case. You use dating that has been done on deposits, plus radio carbon dating, the extent of soil development and how far from and how far above the river channel the deposits are located."

Prior to mapping the Holocene alluvium along the Verde, the same team had mapped the San Pedro and established the protocol and procedures for determining and mapping the extent of Holocene floodplain alluvium.

The team of geologist and other scientists walked and kayaked the entire length of the river making the determination.

The court will ultimately decide what is and what isn't groundwater at a later date. For now maps are a clear indicator of where the court will be headed.

"The process for now is that we gave ADWR the maps, they will run their flow model based on the maps and using the parameters given to them by the court and make a determination.

"People can challenge our mapping or they can challenge the parameters or the modeling," says Joe Cook, geologist and lead author of the AGS report.

The report as well as the maps are available on the AGS website, www.azgs.az.gov. Scroll down and click on the Online pubs button, them scroll down to the Digital Maps for links to the Verde Holocene maps.