Dabbling in jewelry with religious overtones 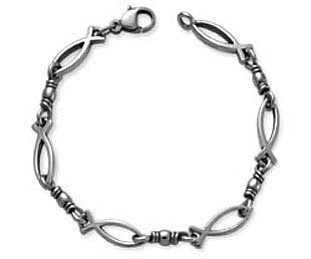 KERRVILLE, Texas - The bracelet is both simple and a bit strange, since it consists of six or seven fishing lures connected end to end.

Some people look at this piece of silver or gold jewelry in the James Avery line and they see fishing lures -- period.

But other shoppers see the same item and they think of these words of Jesus: “Follow me and I will make you fishers of men.” This is especially true if they have completed a United Methodist Walk to Emmaus weekend, or some other renewal program inspired by the Catholic Cursillo movement.

“Most of our customers purchase and wear that for the religious symbolism,” said Paul Avery, executive vice president of the company that his father started in a garage. “But there is a group that has no clue what it means. ... They just happen to like it. They like to fish or whatever.”

So one man’s ring of fishing lures is another man’s symbol of faith.

The key is that there is an element of mystery to symbols of this kind, said another veteran of this family-driven firm based in Kerrville, an arts-friendly community in the Texas Hill Country.

“It’s interesting that you would never find this in traditional church history, this symbol, but you would find the scriptural reference to being fishers of men,” said Howell Ridout, the company’s vice president of marketing and development.

This particular bracelet started out as a “grassroots thing that just happened,” he explained. Emmaus Walk veterans “actually started using fishing tackle from the hardware store” to remind themselves of the importance of this biblical passage. Now, this modern bracelet is one of the company’s most popular items.

Then again, the current catalogue also contains the very first cross that founder James Avery designed in 1954, a variation on a classic Latin design. Some of the Christian and Jewish symbolism used in this jewelry is truly ancient, while other pieces offer modern variations on biblical themes -- such as a bare cross made of nails.

In recent years, Ridout explained, religious items have made up 25 percent of the company’s line and about 25 percent of its sales.

However, nearly 80 percent of all James Avery customers at one time or another purchase at least one item of religious jewelry. Clearly, these items are central to the company’s identity, he said.

For centuries, religious symbolism has been at the heart of some forms of faith. What is unusual about the James Avery story is that almost all of the company’s stores -- there will be 59 by the year’s end -- are in the Bible Belt and 49 are in Texas.

While its customer base includes a wide range of believers, the chain could not succeed in the region in which it is succeeding without appealing to Baptists and other conservative Protestants who for generations have viewed religious symbolism as too “high church,” if not too Catholic.

Then again, the Hill Country location is crucial. Its culture blends art elements from the American Midwest, from Germans settlers, from rustic ranches across the Southwestern and, of course, from Spanish influences. The result is an aesthetic expressed in stone, leather, wood and pounded silver.

“Texas is, geographically, a very unique area,” said Paul Avery. “You have the deep Hispanic culture that is so rooted in that Catholic base. Then you have more of the Protestant side of that, the non-Catholic. And there’s a blend of those two cultures that probably allows a lot of ... natural evolution.”

These hills also are full of church youth camps, a network that exposed James Avery’s work to young seekers as the 1960s veered into the “Jesus Movement” of the 1970s, which led into an era of charismatic renewal in mainline churches and waves of changes in how many Americans worship.

These days, art and even elements of liturgy can be found in a wide variety of Protestant sanctuaries, Ridout said. Churches of all kinds are moving in a more visual, experiential direction.

It has become common to see Texans wearing crosses -- or perhaps symbolic fishing lures -- as they go to work, to school, to the grocery store or to church.

“I think there are some clues there, both as to what is acceptable and to what’s sought after and comfortable,” Ridout said. These changes symbolize “what’s meaningful to people, what truly motivates them.”

(Terry Mattingly is director of the Washington Journalism Center at the Council for Christian Colleges and Universities and leads the GetReligion.org project to study religion and the news.)