Golden Cobra goes down swinging
No locals win, but put up good fights 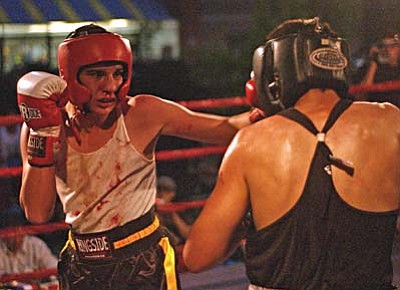 COTTONWOOD-Golden Cobra came up winless in the boxing event at the Larry Green car dealership July 17 in Cottonwood, but they fought hard and lived up to "Never Give Up!" motto of their gym.

It was the first or second fight for several of the Golden Cobra boxers and the ring experience was valuable for their development.

Of course they wanted to win, and it showed by their persistence, but learning in the most important thing for them now.

GC Head Trainer Richard Williams said, "My fighters lost their wind. They came out strong in the first round and lost the momentum. They're all beginners and it's still a learning experience."

Williams added, "We need to work more on defense and stamina."

GC fighter Robert Gonzales agrees. Saturday was his second fight and he wanted to finish it.

His first fight a few months ago was stopped before the final bell rang and he was disappointed he didn't finish.

Gonzales lost the decision Saturday night, but he accomplished the goal of making it to the end.

Between the second and third rounds Gonzales was gagging on blood, but he simply would not give up.

He just kept telling his trainer, "I'm not quitting!" over and over.

"I gave it all that I had," said Gonzales. "I'm proud that I was able to finish the fight."

Gonzales was back in the gym training this week after the fights and he said the outcome of the fight has pushed him to be better prepared for his next fight.

"It motivates me to train harder," said Gonzalez. "Every time I go out in the ring I'm going to look forward to knowing that I can finish out the fight."

The event brought in a lot of great talent from the Phoenix area.

The Fuentes Gym was given the award for best gym and Edgar Ortiz from Hard Knocks Gym was awarded the fighter of the night trophy.

The next scheduled event for GC is Muay Thai on Sept. 18 in Las Vegas, however Williams said their guys could fight in other events before then.