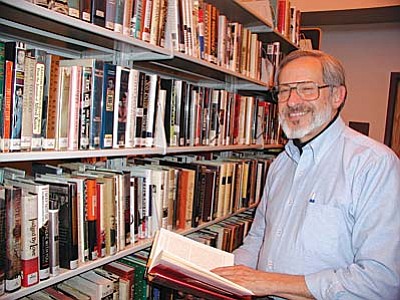 Editor's Note: Dr. Jay Fleishman died earlier this week. He leaves a wonderful legacy, including the Fleishman Family Foundation which provides scholarships to local college students. Tuesday, the Cottonwood City Council presented a plaque in Dr. Jay's honor. Anyone who wants to contribute in his memory can send donations to the Fleishman Family Foundation Scholarship Fund, the address is P.O. Box 369, Cottonwood, AZ 86326.

Dr. Jay S. Fleishman believes that memorizing lists is an excellent way to keep one's memory sharp. Geography is a favorite topic. He is always prepared to use his lists to quiz others, like his college chemistry students. "Can you name the 15 countries that made up the U.S.S.R.?" he asks.

Dr. Fleishman served on the Cottonwood Library Board for 12 years and is currently president. He says the library supports youth, adults, education, entertainment and learning.

He encouraged community members to learn everything they can about what their local library has to offer. "We don't have a card catalogue, we have an electronic filing system," he says. "It is advantageous because we're part of a network. A patron is more likely to get the book he or she wants. With this share system, the library doesn't have to stock every book in print, and it saves tax dollars. A volunteer can help patrons use the computer to find books, and that makes it effortless," he says.

Explaining the reason for creating the Fleishman Foundation, the doctor says, "In 1999 Yavapai College tracked 300 certificate-bound students. In 2005, fewer than 20 percent had obtained their two-year certificates within five years." Education is the doctor's passion. "We need students to get their master's degrees. We need teachers, technicians in industry," he emphasizes. "If the issue is that students have to work full-time and can't take many courses, then the foundation wants to enable them to work part-time and take a full course load." The foundation accepts donations and continues to seek grants to help students.

When he's not working with the Fleishman Foundation or the many other organizations in which he volunteers, Dr. Fleishman tends his greenhouse garden where he enjoys growing herbs, flowers and vegetables. "I started gardening in childhood," he says. Last year friends and neighbors shared the zucchini squash bounty. "Twenty plants produced more than 170 zucchinis," he says, smiling.

In the '90s, he was parliamentarian for the Arizona Medical Association. "I had to read Robert's Rules of Order about five times," he laughs.

He was honored to represent all the doctors in the state. He was also President of the Bradshaw Mountain Parliamentary Club. "We strove to learn in those meetings. We learned from criticizing each other, and no one took it personally," he says.

Dr. Fleishman was asked by Cottonwood City Manager Brian Mickelsen to serve on a capital improvement projects board this year. "When we ranked the capital improvement projects (100+) submitted by the city department heads, I used a committee of department heads and several members from boards and commissions," Mickelsen says. "Jay represented the library board on that review committee. I used this committee's ranking of the projects to prepare my recommendation to the city council."

Dr. Fleishman says serving on the capital improvement projects board was educational and enjoyable. He has also been an active member of the Clarkdale-Verde Kiwanis Club for 15 years and served as president for one year.