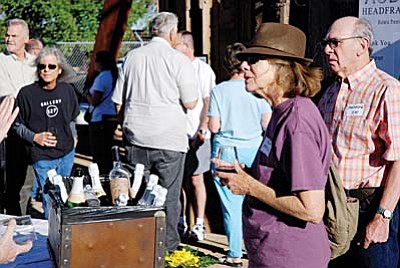 JEROME - It is the oldest and largest wooden mining structure in Arizona. The Audrey head frame stands above the Audrey shaft, which descends 1,900 feet straight down into the side of Mingus Mountain. The head frame and shaft worked together from 1918 to 1938 to raise more than $125 million in ore to the surface for United Verde Extension Mining Company.

Now the head frame and shaft are the centerpieces to an outdoor mining museum - The Audrey Headframe Park. The park opened with a reception Thursday night.

"This was a cooperative effort between the Jerome Historical Society and the Jerome Chamber of Commerce," said Tom Pitts, president of the Chamber. "This will be a free park."

"This started with the idea of restoring the head frame only," Pitts said. "I had the opportunity to write a grant to the Arizona Office of Tourism."

That grant came through, and the concept for the head frame restoration turned into an idea for an outdoor mining museum. The Audrey Headframe Park comprises the restored head frame, a structural glass platform where guests can peer down into the shaft, the electric generator that provided power to Jerome and much of Phoenix, numerous pieces of mining equipment and plaques explaining the history of everything on display.

A special light and mirror system has been designed so that visitors can see down into the concrete-walled shaft. The platform itself was designed by the same company that built the glass platform that sticks out over a portion of the Grand Canyon.

Jimmy "Rawhide" Douglas took over ownership of the UVX Mining Company and the Little Daisy claim in 1911. He began digging his shaft in 1912, the same year that Arizona became a state. The Audrey head frame was completed in 1918, and it was used until the mine closed in 1938. During that time, the head frame lowered and raised ore cars and elevators full of miners down to side tunnels at 100-foot intervals.

The head frame, shaft and rescue cage were again pressed into service during the late 1980s when Budge Mining Company leased the Little Daisy for gold exploration.

The head frame restoration project got underway in December of 2007. Phase One included photographing and removing the large timbers that were broken and rotten. The first phase included cutting and installing new timbers to rebuild the head frame and sealing all timbers.

At that time, Elissa Ballew was a grant writer for the historical society. She explained in 2007 that the historical society got a lease for the property from UVX. Because the head frame was getting close to the point of being lost, the society was using money that it had set aside for the early stages of Phase One. In 2007, Ballew was writing a grant application seeking funds from the Heritage Fund of the State Historic Preservation Office.

The Audrey Headframe Park is located at 55 Douglas Road., next to the Jerome State Historic Park.