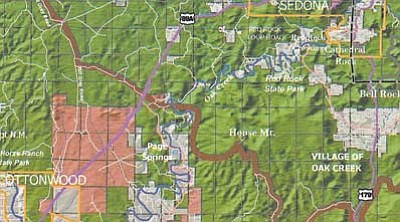 WASHINGTON D.C. - Over the years people who settle in Sedona have been heard to say, "it should have been a National Park."

The Red Rock splendor around Sedona is certainly magnificent, but the approval of a National Scenic Area surrounding the community will not make it a National Park. If approved, the legislation will stem further growth of the urban area into surrounding Coconino National Forest.

National Scenic Area legislation, which has seen strong support among many in Sedona, originally proposed by Keep Sedona Beautiful, is finally facing subcommittee hearings in the U.S. House of Representatives beginning Thursday.

Congresswoman Ann Kirkpatrick in March introduced H.R. 4823 to anchor in perpetuity the land exchange restrictions of the Coconino Forest Plan Amendment 12. That amendment restricted Forest Land Exchanges to 160,000 acres of the Sedona Ranger District to a small area around the location of the Sedona Wastewater plant.

The first stop for the measure is at the subcommittee chaired by fellow Democratic Arizona Congressman Raul Grijalva's subcommittee.

Last Friday, Kirkpatrick told the House that the Sedona area bill, and one for Southern Arizona, are economic stimulus measures that will encourage tourism and spark jobs and urged Congress to move on them aggressively.

"I am getting the ball rolling with legislation to designate the Sedona Red Rocks as a National Scenic Area and to expand the Casa Grande Ruins National Monument. These bills will protect these magnificent attractions, bring new visitors to Arizona and help us get folks to work with almost no cost."

The House Natural Resources Subcommittee on National Parks, Forests and Public Lands will be holding a hearing on H.R. 4823 and the Casa Grande bill H.R. 5110 on June 10th.

Last Tuesday, a newly-seated Sedona Council, with a polar opposite philosophy to the prior council, reversed the earlier city stance against the NSA by unanimously endorsing the legislation.

The boundaries of the NSA would extend from the Mogollon Rim, including Oak Creek Canyon on the north. The line, on the west would follow Bill Gray Road south and branch east just north of State Trust Land that Cottonwood wants to annex. It would continue just north of Page Springs, and along the line of Beaver Head Flats to also include House Mountain, SR 179, the Village of Oak Creek and the Munds Mountain Wilderness.